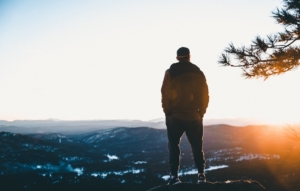 If you’re interested in being somebody in your life, think again. Chances are, Jesus is not on board.

Take a step back to the 1st century and imagine a ruler of the Pharisees invites you to a Shabbat dinner. This is a meal that Jews observe on Friday night, just after the sun goes down. You’re reclining on your elbow at a low, U-shaped table with the other guests. Your host is an important person, which probably means that you’re important as well, or at least think you are. Oh, and Jesus is there, too.

As Jesus looks around, he notices that many of the guests are choosing places of honor. Perhaps you also have wormed your way a little closer to the far right end, where the host would sit. After all, this position would better fit with the level of respect that you deserve, right?

Then Jesus starts saying, “Whenever someone invites you to a feast, don’t sit in places of honor.” Why not? In case someone else who’s more important than you comes in and you get moved down to the lowest place. “Instead,” he says, “go and sit in the lowest place, so that when your host comes he may say to you, ‘Friend, move up higher.’ Then you will be honored in the presence of all who sit at table with you” (Luke 14:7-11).

Next, Jesus turns to the host. Not usually one to care about tact, he essentially informs the man that he shouldn’t have done what he just did.

“When you give a dinner or a banquet, do not invite your friends or your brothers or your relatives or rich neighbors, lest they also invite you in return and you be repaid. But when you give a feast, invite the poor, the crippled, the lame, the blind, and you will be blessed because they cannot repay you” (Luke 14:12-14).

What sort of repayment is Jesus speaking of here? Surely this man is not expecting to recoup the money he lost in this banquet by being invited to the home of his rich neighbor. Instead, he expects a reciprocation of honor, of respect. He wants to be a man with connections, a person that important people invite. In short, he throws a banquet and invites “somebodies” because he wants to be a “somebody” himself.

But Jesus reminds him that it is actually far better to invite people who are not anybody at all. These are the people who can’t invite him back, give him connections, or make him important—at least not important in this world at this time. And, as Jesus has just explained, this world and this time is all upside down. “So if you do this,” he tells the man, “you will be repaid at the resurrection of the righteous” (Luke 14:14).

After this, Jesus tells one final parable. A man once threw a great banquet and invited many important people. When everything was ready, he sent his servants out to call everyone to come. However, when those who were invited were actually called, they began to make excuses until, one by one, they all declined to come. Angrily, the man commanded his servants to invite the poor and crippled and blind and lame from the streets of the city and even the highways outside the city until his banquet was full

Quite a story to tell your group of honored guests as you all recline around the table together. The point is clear and stinging: the way things are now is not the way they will be. The people who are important now are not the people who will be important later. And those who will eat the greatest banquet of all, at the end of the age, are not the ones you might expect.

So here’s a thought. Give up your hopes of being somebody in life. Instead, just be a nobody.

Think of career paths, academics, “climbing the ladder.” Have you ever thought that maybe Jesus is opposed to climbing ladders? Or think of social settings; the favoritism you show to those you want to impress and your neglect of those who are strange or unimportant. Or consider church and ministry—It’s possible to play “banquet games” even there as you eat lunch with the right people, feel honored by the pastor’s attention, or seek to be respected because of your Sunday School teaching.

Just give it up. Allow yourself to be nobody. Have a seat at the end of the table and you might just find Jesus sitting there too.