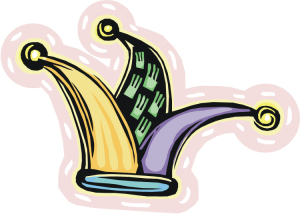 I once heard about a man who spit himself to death. It might be an “urban legend,” but as the story goes, he died while competing in a distance-spitting contest. Being a bit drunk, and running toward the low railing of the bridge, he underestimated his forward momentum and . . . well, you can imagine the rest. A similar foolish fatality story (authentic or not, I do not know) involved a man showing his son the proper way to handle rattlesnakes. When the snake bit him, he angrily bit the snake back. Actually, he tried to bite the snake’s head off, which explains how he died.

Even if these stories are untrue, senseless tragedies like these do actually occur. In a recently publicized incident, a man killed his wife when he used a handgun to shoot through the wall of his house. Why did he do this? He needed to punch a hole for his satellite TV cable and did not know his wife was standing outside.

Even a wise, cautious person can have an unexpected accident. Foolish behavior is different in that it certainly (or at least with a high degree of probability) leads to unfortunate or tragic consequences. Everyone should know better, but not everyone learns before it’s too late.

In the Bible, the foolish-behavior principle is applied to sexual sin. It seems like a good idea at the time, it powerfully appeals to our natural (though sinfully distorted) desires and impulses, but it leads only to negative consequences and regret. That’s why the Bible warns us to “Flee [sexual] immorality” (1 Cor. 6:18) and calls people who engage in it “fools.”

Proverbs 6:32 says, “The one who commits adultery with a woman is lacking sense; he who would destroy himself does it.” In Proverbs 7, the man who commits sexual sin is once again described as “lacking sense” (v. 7). He naively goes to the immoral woman, “as an ox goes to the slaughter, or as one in fetters to the discipline of a fool” (v. 22). “He does not know [even though he should] that it will cost him his life” (v. 23). Proverbs 5 sums up the foolishness of sexual sin like this:

For why should you, my son, be exhilarated with an adulteress
And embrace the bosom of a foreigner?
For the ways of a man are before the eyes of the Lord,
And He watches all his paths.
His own iniquities will capture the wicked,
And he will be held with the cords of his sin.
He will die for lack of instruction,
And in the greatness of his folly he will go astray.
(Prov. 5:20-23, emphasis added)

The New Testament continues this theme. Paul wrote to the Ephesians, warning them to stay away from fornication (among other sins, cf. 5:5). He then wrote, “Therefore be careful how you walk, not as unwise men but as wise, making the most of your time, because the days are evil. So then do not be foolish, but understand what the will of the Lord is” (Eph. 5:15-17). Elsewhere he wrote, “For we were also once foolish ourselves, disobedient, deceived, enslaved to various lusts and pleasures” (Titus 3:3).

The overarching biblical principle is summarized this way: “The wise man is cautious and turns away from evil, but a fool is arrogant and careless” (Prov. 14:16). “The prudent sees evil and hides himself, but the naive go on, and are punished for it” (Prov. 22:3).

Our society would have you believe the exact opposite about sexual sin—that it is rewarding rather than risky. Various forms of mainstream media have dramatized, romanticized, and sanitized sexual sin for public consumption. Because of huge financial profits, sex plays a starring role in the movies, on TV, and in advertising of every type. The fact is, sex sells—movies, music, magazines, make-up, clothing, cars, cell phones, shampoo, diet plans, sporting goods, and virtually any other product you can think of—to the tune of billions of dollars each year. It is marketed so cleanly and professionally that consumers have come to see it as normal, desirable, and without serious consequences. Even “decent” people who shake their fingers at prostitution, pornography, and teenage sex, go right on laughing and lusting at the parade of “respectable” immorality in the media.

Please don’t play the fool yourself. It’s all a huge lie. Sexual sin is not cool, funny, dramatic, romantic, or profitable. It is grotesque in God’s sight, and it leads ultimately to death—like the ignorant ox being led to the slaughter. Do you not think the fish frying in the skillet would have refused the bait had he known about the hook?

If you buy into the lie and go on practicing sexual sin—if you believe the advertisers and obey your own impulses rather than believing and obeying God—you will pay, not profit. However wise and successful you appear according to the standards of our perverse culture, in reality you will be the person described in Proverbs 26:11—”Like a dog that returns to its vomit is a fool who repeats his folly.”