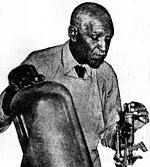 If you’d met George walking along a country road or hiking in the woods in the Deep South in the 1930s, it’s likely you would have underestimated him. In his later years, the gray-haired black man was thin, stooped and frail, and could often be seen shuffling along in the woods, looking for wild herbs and other plants to take back to his rooms. His favorite coat was faded and had more patches showing than original fabric, but he always had a flower or some other bit of plant life in the lapel.1 He cared little about his appearance, but did object when someone described him as a “toothless old man.” “Nonsense” George responded, “If he had taken the trouble to inquire, I could have proved I am not toothless. I had my teeth right in my pocket all the time.”2

It would have been hard to believe that this humble man had testified before the House Ways and Means committee in Washington, D.C. as an expert in the field of agriculture. He was a college professor, the subject of a feature film and several biographies, and had a museum dedicated to his work. In the past, he had dined with a President and had job offers from Henry Ford and Thomas Edison.

George Washington Carver was born a slave on a small farm in Diamond Grove, Missouri, just before the end of the Civil War. His father died in a farming accident before George was born, and the Klu Klux Klan kidnapped his mother shortly after his birth. Efforts to find her failed, and so her owners, Moses and Susan Carver, raised George and his brother Jim as their own sons.

When George was about ten years old, a playmate told him about attending Sunday School. George had never been to church and was eager to know what was taught there. George’s playmate told him about the Creator God, and that he could talk to Him in prayer. George later said, “I do not remember exactly what he said; only remember that as soon as he left I climbed up into the loft, knelt down by a barrel of corn and prayed the best I could.”3

George began a lifelong habit of reading his Bible daily and asking God to help him in his studies. His new faith in God caused him to see the handwork of the Creator everywhere in nature. He would later say, “We get closer to God as we get more intimately and understandingly acquainted with the things he has created.”4 George began to gather different kinds of plants into a secret garden in the woods, where he studied them and learned how to help them grow. Soon young George was teaching others what he learned, and was nicknamed “the plant doctor” in his hometown.

Years later, George was still a sort of “plant doctor.” After completing his education, he came to work at the Tuskegee Institute to train others in agriculture and to do research that would help poor Southern farmers find ways to grow crops more efficiently. “The primary idea in all my work,” Carver said, “was to help the farmer and fill the poor man’s dinner pail. . . . My idea is to help the man farthest down. This is why I have made every process just as simple as I could to put it within his reach.”5

Carver believed that nothing existed without purpose and that the Creator would help him unlock the mysteries of nature to serve struggling Southern farmers. Through his research he found ways for the poorest to use composting and other natural fertilizers to improve the yield of their crops. He issued bulletins that explained, step-by-step, better methods of farming like crop rotation and soil conservation. He explained the best methods for preserving foods and encouraged planting fruit trees. He helped to develop new hybrids of cotton that were resistant to the devastating boll weevil. He suggested the best crops to grow in Southern clay, especially peanuts and sweet potatoes. Carver documented over 300 products that could be made from peanuts, most of which he invented in his own laboratory.

When asked how he was able to find so many new ways to help farmers, Carver replied, “I didn’t make these discoveries. God has only worked through me to reveal to His children some of His wonderful providence.”6

Carver died in January 1943 and was buried on the Tuskegee campus where he taught for years. His tombstone reads, “He could have added fortune and fame, but caring for neither, he found happiness and honor in being helpful to the world.”