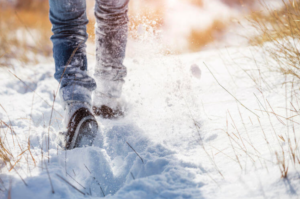 Is there anything too small for the Lord? We often surmise (rightly so) that there is nothing too big for him, but fail to see God working in the smaller ways. Looking back at overwhelming trials, we speak about how God so obviously brought us through, but what about the day-to-day struggles and needs? Is God working in those moments for us, or are we on our own to make the little stuff happen?

John Stam was a missionary to China in the Early 1930s. He was martyred in 1934, along with his wife Betty, at the hand of Chinese Communists. They were 27 and 28 years old, respectively, and had met at Moody Bible Institute in Chicago. While preparing to be sent to China, their hearts were drawn together, but they were not married. Betty had been accepted by the China Inland Mission (CIM) and was to set sail for China one year earlier than John, who was not yet finished with his studies at Moody. They planned to marry if it pleased the Lord, but were also happy to remain single so that they might serve him in a greater capacity. After John’s arrival in Shanghai in 1932, it seemed to be God’s will, and they married in 1933.

While at Moody, John decided to trust God to provide for all of his financial and schooling needs by not disclosing them, big or small, to anyone but the Lord alone. This was one way he prepared his mind and heart for missionary work in China. Many stories of God’s provision came from this, and one such occurrence was his first Christmas in Chicago, which he remembered in a letter written later from China.

A classmate had offered to drive him home for Christmas, and John had gladly accepted, but was inwardly reserved about the trip because of his lack of warm socks.

I had told Tom I was going with him, but I didn’t have any money, and couldn’t even buy a warm pair of socks for the trip home in the car. Then, one night, I pulled on one of the four shirts I had been planning to take home with me, and it ripped. I did not want to take home a mended shirt, for Mother would guess that the finances were low, and I did want to see the Lord’s provision, as a test of what His care would be like in times to come.

I went out by the lake, feeling a bit blue and downcast, and found myself thinking, “Well, it’s all right to trust the Lord, but I wouldn’t mind having a few dollars in my pocket.”

Like a flash, I could have kicked myself! To think that I was valuing a few dollars in my pocket above the Lord’s ability to provide a million if I needed it.

A few minutes later, just as I was crossing Michigan Boulevard—and jay-walking, too, which one is not supposed to do—I picked up a five-dollar bill from the street. Oh, what a rebuke it was from the Lord! Just one of those gentle rebukes the Lord can so wonderfully give us. The five dollars was beautifully acceptable, even though it was wet. I dried it out, and next day visited Montgomery Ward’s bargain counter, and bought a couple of shirts and a good warm pair of socks, just the thing for the trip.

I am wearing those same socks still, and every time I pull them on, these cold nights, they preach a sermon on the Lord’s wonderful power to provide, whatever my future needs may be.[1]

The Lord was teaching John that he was able to provide for all his needs—even a pair of socks. And these lessons anchored he and Betty in reliance upon the Lord, so that from a Chinese prison, with a demand of $20,000 for their lives, John could end his last letter to the CIM, “God give you wisdom in what you do and give us grace and fortitude. He is able.” The next day they knelt before their captors and were killed, entering into the glorious presence of their great Provider.

The young lions suffer want and hunger; but those who seek the Lord lack no good thing. Psalm 34:10

And do not seek what you are to eat and what you are to drink, nor be worried. For all the nations of the world seek after these things, and your Father knows that you need them. Instead, seek his kingdom, and these things will be added to you. Luke 12:29-31