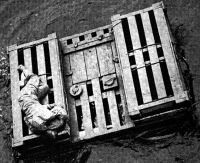 All day long, you could hear the children laughing and playing on the ship. Robert and Mary Bell, and Richard, Georgia and Carol Shaw had made friends of all the crew, and the sailors allowed them to go nearly anywhere on the ship they wanted. The girls liked to play with the caged exotic birds packed on board to be transported to zoos in other countries. The boys liked to ask questions in the engine room. All the children loved to run on the decks outside or play hide and seek in the hold.
Everyone knew that the ship was carrying a cargo of palm oil (a cooking oil made from the fruit of the palm tree) and cocoa beans, but only the captain and first officer knew about a special shipment of gold hidden somewhere on the ship.
The children were traveling home to the United States with their parents, Mrs. Bell and Rev. and Mrs. Shaw. It was the beginning of World War Two, and the Nazi government had taken control of the part of Africa where the parents had been teaching people about Jesus. It was very dangerous to stay in the part of Africa controlled by enemies of the US government, so they escaped and made their way toward home.
The children had already enjoyed some great adventures. They were smuggled out of Africa by brave French resistance workers, guarded by soldiers with guns and then spent a month in a exotic port city waiting for transportation across the South Atlantic toward home. Finally they boarded the West Lashaway. The weather was beautiful and everyone praised God for the restful, pleasant time with friends after all the danger and excitement.
They were just two days away from Trinidad on Sunday morning, August 30, 1942. Rev. Shaw led a worship service and everyone had lunch together afterwards, as usual, with pumpkin pie for dessert. The girls went to play with the birds and the boys took off to watch the crew. Mrs. Shaw sat on deck, enjoying the weather, while Mrs. Bell napped in her room. Everything seemed calm and peaceful.
No one had any idea that just a few meters way, a German submarine was silently taking aim. At exactly 2:31pm, it fired two torpedoes.
The alarm sounded on the ship: “Torpedo wake! Starboard amidships!” Seconds later everyone heard the sickening crash and felt the jolt. Carol fell and broke her arm. The West Lashaway began to turn over on its side as all the children scrambled to find their parents and to strap on life jackets. They ran to the lifeboats, but since the ship turned, the boats could not be let down into the water. The ship sank with everyone on board. It took only one and a half minutes.

If you were watching from the surface of the ocean, you wouldn’t have seen anything for a few seconds. But then, POP, one head popped up out of the water, then another and another. Bags of cocoa beans and other items from the ship came to the surface. An 8×10’ life raft floated up, and the survivors began to swim toward it. Nineteen people made it to the raft, including the children, Robert, Mary, and Richard. A sailor dove into the water and rescued Carol. Mrs. Bell was saved, but Mrs. Shaw and Georgia were not. Rev. Shaw was badly hurt, but able to swim to a different raft. The palm oil from the ship made a thick, greasy scum on the surface of the ocean. Everyone was covered with this goo as they climbed out of the water.
This part of the story is very sad, isn’t it? But it makes all the difference to know that all the children loved and trusted Jesus. Carol and Richard were heartbroken about losing their mother and sister, but they knew that someday they would all be together in Heaven. Rev. Shaw must have wondered what would happen to his children, but he knew that God was watching and in control of everything. He could trust God to take care of his children, and he was glad they were with Mrs. Bell.
Someone asked Mary if she was frightened when the ship went down and the water closed over her head. “No, I was not afraid,” she said. “I knew that if I was to die I would go straight to Heaven.” God gave her strength and courage just when she needed it. She and the others would need lots of strength and courage in the days to come.
The first night was very hard. There were no railings around the edge of the raft. Mrs. Bell stayed awake all night to watch the children, for fear one of them might roll off the raft in their sleep. It was cold and the spray from the ocean kept everyone wet all the time. There was nothing to lean her back against, and it hurt terribly from sitting up. She tried to keep very still so as not to disturb Carol’s broken arm. Everyone was packed so tightly on the raft that if anyone moved, they would jostle everyone else on the raft.
The next morning, Mrs. Bell prayed with the children, just as she did every day. They sang a hymn and then the children worked together to memorize verses from the Bible. Since everyone was packed together so closely everyone overheard, of course, and that might have been Mrs. Bell’s gentle way of comforting the crew with words from Scripture. Every evening, they did the same thing.
During the day, the captain assigned men to take turns watching for ships. All day long they looked and looked, and all they saw was water. Well, that’s not completely true. If they looked down, they saw sharks. Fourteen big, scary sharks circled around and around the raft the whole time they were in the sea. No one dared trail a hand or foot in the water! The raft floated about a foot above the ocean surface—just inches from the razor sharp teeth of those big sharks.
There was a little water and a little food packed in the raft. Every day the passengers were able to have a few bites of pemmican and a few sips of dirty water. Pemmican was canned coconut with oils and nutrients added. It didn’t taste good, but Mrs. Bell and the children thanked God for it, perhaps with more feeling than when they had the delicious pumpkin pie on the last day aboard the ship. They understood that this food was the way God provided for them to survive on the raft.
Days and days went by with the sun beating down all day and the spray from the ocean making them cold at night. Everyone was wet all the time, and developed sores on their legs and feet. The palm oil scum turned out to be a blessing, protecting them from sunburn.
There was nothing to do all day but watch the sharks and look for ships. Sometimes the crew asked Mrs. Bell to tell them Bible stories to help pass the time. I’ll tell one of the stories to you, and you see if you can guess why Mrs. Bell chose it.
One day, after Jesus had fed 5,000 people with just five loaves of bread and two fish and healed many who were sick, He wanted to have some time alone to pray. He sent the crowd away, and asked His disciples to sail their ship on to the next town. Jesus went up on a lonely mountain and prayed long into the night.
While Jesus was praying, the disciples were struggling. A storm came up on the Sea of Galilee, and no matter how hard they tried, the disciples could not row to shore. The Bible says that Jesus saw them struggling (Mark 6:48) and came to them, walking on the water. Jesus told them not to be afraid, got into the boat, and calmed the storm. 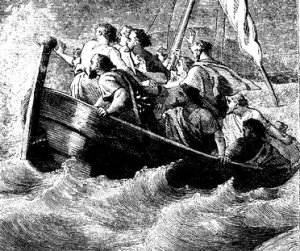 Can you guess why Mrs. Bell told that story? I think she wanted to teach the men and remind the children that Jesus is always watching when His people are in danger. He is the only one powerful enough to save the people on the raft, not only from the dangerous ocean, but from a worse danger—the danger of their own sins.
Just like the people on the raft, and just like the disciples on the Sea of Galilee, none of us can save ourselves. They needed someone else to come and save them from the water, and we all need Someone else to save us from our sins. Jesus is that Someone! On the cross, He took the punishment His people deserved to rescue them.
I’m happy to tell you that Mrs. Bell and the children were rescued after 21 days adrift in the South Atlantic Ocean. Just as the food and water ran out, an American ship spotted them and brought them on board. Everyone had a delicious meal of tomato soup and visited the doctors.
Later, Mrs. Bell and the children all said that Jesus was very real to them on the raft. They knew He was with them, almost as if they could reach out and touch Him if they tried. One of the crew visited Mrs. Bell in the hospital and told her that he learned to trust Jesus on the raft and was rescued from his sins.
How about you? Have you been rescued by Jesus?

Facts for this story were taken from Adrift, by J.H. Hunter, Zondervan, 1943, In Peril on the Sea by Robert Bell and Bruce Lockerbie, Christian Publications, 1994 and A Rainbow Every Day, by Mary Whitbeck, http://www.alliancelife.org/article.php?id=30