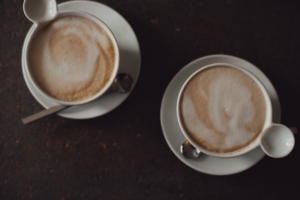 I don’t want to be so bold as to say that coffee shops and fast-food restaurants (I’m sitting in one now) are God’s gifts to evangelical believers, but I may come close. I mean to convey that the yearning for relationships is so great that various eateries have purpose statements to encourage people to hang around. These shops have a good goal in mind—to fill a void in most every human. Frequenting such places allows what I just now experienced, a meaningful discussion with an employee who is considering Christ’s claim on her life, without offending the establishment. It permits casual conversations that build friendships over time so that deeper discussions can take place and real concern can be shown. That ought to make Christians happy.

When I was in Seminary, I took my first trip overseas . . . to Switzerland primarily, but also a few other places. The trip was an eventful one, including some time with Edith and Francis Schaeffer in the middle of their years in Huemoz, and warm discussions with other sincere believers. I also had my first visit to Bristol, England, to see the orphanages that George Muller had built. I have another vivid memory. I remember distinctly seeing and experiencing the coffee shops in the various villages in the Alps, then thinking to myself, “I don’t know anything like this in the U.S.” The coffee was too expensive, and that took some getting used to, but the idea was the thing . . . the idea of people seeking community in a frenetic hostile world. I knew there were bars and nightclubs in the States, something I had no inclination toward, but this coffee/tea kind of environment for socializing was a concept that I immediately loved. I still do.

As hard as it might be for some to believe it, several years passed before we began to see the first coffee shops in the U.S. In my simplistic view, their emergence seemed to correspond to the hunger people felt for being near other humans. For many, this took the place that churches should take, providing caring friendships. Soon there were “the regulars” and relationships got even deeper. You learn their names and their children’s plights and their concerns and trials and their ambitions. For a person like me, and many others, the coffee shop and those other WiFi-equipped places have become the sort of platform we’ve longed for in this barren merchandizing maze of life, places where people can actually talk. Our church provides that (though many don’t), but the coffee shop is another such place with this additional value—we can talk with people who are not like us, people whose goals and interests are far different, people on their journey to a different eternity. We can share what is important to us as well as find out what moves them. The results are advantageous for the gospel.

I have good friends from Eritrea who are neighbors of ours. We were thankfully instrumental in the woman’s conversion to Christ, after long hours of talk over a few years. When the family moved to the States, she sorely missed the relationships in her home country. We make a mistake when we think that all comers to our country think we are great. We lack something: sufficient community. And most third world people have exceptional difficulty getting over the loss of it. Soon, sadly, affluence and commodities that were rare in their past win the day and they substitute cleanness and mammoth stores and glitz and readily-available electronics for what they now only faintly remember. At first, however, there is a deep pain that most of them feel.

My friend said that her husband’s mother was totally confused when she first visited her home from Eritrea. She grabbed her coffee cup the first morning, and walked across the street to a house, knocked on the door, and was greeted by the neighbor. But her mother-in-law spoke no English. They stared at each other and the door was shut. The mother-in-law couldn’t understand it. In her country, community was so strong a concept that this would never have happened, whether there was a language barrier or not.

Believers must do all they can to get into relationships with unbelieving people outside the churches. One such place (not the only place, of course) is on the neutral ground of the coffee shop world. It is no small thing and we should be there, sipping and talking and building true relationships with others because of love. Where else will you meet the craggy old codgers who will be there one week and are dead the next? Where will you visit with the foreign medical student, the lonely college kid nobody hangs out with, the grandmother who wants to show you her photos, the businessman who has to have his java and bagel every morning, the Muslim man who sits alone, the shop owner at the city market, the athletic man in his workout clothes, the local Catholic priest? Where there are places to do that, believers should have an inbred compulsion to be there. A mentality to mix with the world in common places for the gospel is an essential aspect of vibrant Christianity.

Jesus was called “a friend of tax collectors and sinners.” Let’s be like him.