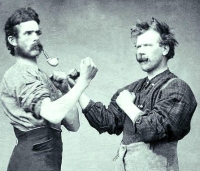 My wife and I were rudely awakened one night by a terrible sound outside our bedroom window. We ran outside and discovered two raccoons up in a tree, fighting. I suppose it would be more accurate to say they were screaming at each other, and they were undeterred by the fact that their loud quarrel had now drawn an audience. Their hideous, nerve-grating snarls elevated the saying, “like fingernails on a chalkboard,” to a whole new level. I suddenly gained an appreciation for the men who turn these cute woodland creatures into coonskin caps.

But then we noticed something strange: even though the disturbance continued for several minutes, none of our very close neighbors had come outside or peered out of their windows. None of them had even turned on the lights inside their homes. Our own children remained soundly asleep despite the fray. It was as if we were the only two people with ears to hear the ugly sounds of the coon fight. As the combatants went their separate ways and we went back inside, we both began to wonder if perhaps God was showing us what our own quarrel, just a few hours earlier, had sounded like to Him. If God actually slept (which He doesn’t), our angry voices surely would have awakened Him.

What God hates, He also condemns in the Bible. Among the sins that receive much negative attention, strife, quarreling, and contentiousness are never treated as low priorities. In the book of Proverbs alone there are no fewer than twenty direct references condemning these sins.

But we also know that people come in all different “flavors” with a vast array of ideas, opinions, preferences, backgrounds, cultural norms, values, and styles. Is it possible for this much variety to coexist without strife? Is it possible for people to just let other people be themselves without fighting about their differences? What if the differences relate to religious convictions, even between Christianity and some other world religion? Is a little bit of strife and quarreling OK with God then?

I don’t remember what our quarrel was about that night. Perhaps one of us (most likely my wife) was right and the other (most likely me) was wrong. But even if that were the case, being right is not enough. Even when we are right about the most important things in life—like the gospel—we sin if we resort to contentiousness and quarreling to defend our position.

Of course, we must remember that Jesus did not come to bring peace on earth, but rather division (Matt. 10:34; Luke 12:51). That dividing point is the gospel—“the word of the cross,” the message of “Jesus Christ and Him crucified” (1 Cor. 1:18, 2:2). But where division exists because of the gospel, whether between you and a family member, or a neighbor, or a co-worker, or a person who practices a completely unacceptable lifestyle, or even a person who hates and persecutes you for your beliefs, your demeanor must not be such as produces, encourages, or furthers strife. Instead, conduct yourself as Paul instructed Timothy:

The Lord’s bondservant must not be quarrelsome, but be kind to all, able to teach, patient when wronged, with gentleness correcting those who are in opposition, if perhaps God may grant them repentance leading to the knowledge of the truth, and they may come to their senses and escape from the snare of the devil, having been held captive by him to do his will. (2 Tim. 2:24-26)

God does not need your sharp tongue, or your hot temper, or your impatience, or your frustration, or your ability to blast away condescendingly at someone else’s false idea, in order to bring them to the knowledge of the truth. When you use those tactics, you have likely forgotten that you too are a trophy of His mercy—the same result you hope to see for your opponent. All God requires of you is that you tell them the truth, and that you present it in a winsome way—one that would actually make them want to be like the God you claim to represent.

Furthermore, if you can display a peaceable demeanor when dealing with unbelievers, even hostile ones, then certainly you can live out the fruit of the Spirit—“love, joy, peace, patience, kindness, goodness, faithfulness, gentleness, and self-control” (Gal. 5:22-23)—when addressing differences of opinion between you and your believing wife or husband, your children, your parents, your siblings, your fellow church members, or even those believers who differ from you on certain points of doctrine or practice.