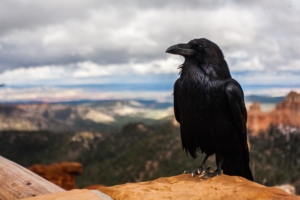 If we’re honest, our view of God’s provision for us is pretty narrow. Following typical western assumptions, we think that if we work hard at a good job, or any job, we will see a good return and be provided for. That’s how God does it—through expected means.

He does provide that way, but we need to widen our perspective if we want to see the full picture of how God cares for his children.

Elijah was a man, and by that we understand that he suffered from weakness, fears, and a keen ability to feel like he alone was on God’s side [see 1 Kings 19:18]. In many ways, aside from his specific prophetic ministry, he was just like you—a man with personal struggles and a wonderfully powerful God.

One day, Elijah spoke out in faith to wicked and idolatrous king Ahab, “As the Lord, the God of Israel, lives, before whom I stand, there shall be neither dew nor rain these years except by my word” (1 Kings 17:1). We know this was an act of faith in God, because he then (and maybe had before as well) prayed fervently that what he told Ahab would actually happen [see James 5:17]. Elijah made a cataclysmic statement to the most powerful man in Israel, and he prayed fervently that God would make it happen.

Elijah spoke with an oath, “as the Lord, the God of Israel, lives” so that Ahab wouldn’t question what he said. Only after he spoke this way did the word of the Lord come to Elijah, which makes me think that the prediction about the rain was more a statement from faith than it was a report of “Thus says the Lord.”

This is the context of the following two instances of God’s provision for Elijah. In the drought that follows, which is what Elijah is fervently asking God to bring and prolong, God commands surprising provision for his prophet.

A lesson from Elijah: God provides in unexpected ways when his people step out in faith.

And the word of the Lord came to him: “Depart from here and turn eastward and hide yourself by the brook Cherith, which is east of the Jordan. You shall drink from the brook, and I have commanded the ravens to feed you there” (1 Kings 17:2-4). When Elijah moves on according to the word of the Lord, he has plenty to eat and drink.

After a while, the brook dries up and the word of the Lord comes a second time, “Arise, go to Zarephath, which belongs to Sidon, and dwell there. Behold, I have commanded a widow there to feed you” (1 Kings 17:9). We find out soon that the widow has no idea that she’s been commanded by the Lord, but through faith, she and Elijah experience miraculous provision of oil and flour for three years while the rain is kept at bay by Elijah’s prayers.

The prophet trusted God and followed his direction to different areas around Israel, and in this way, the Lord supplied all of Elijah’s needs.

So it is with faith today: God’s people act according to his word and will, and God gives them what they need. Should we be expecting this unexpected provision?

Here is something we can be absolutely sure of, “But seek first the kingdom of God and his righteousness, and all these things will be added to you” (Matt 6:33). Do you believe? Hear this promise from God concerning temporal provision and look at how he supplied Elijah in widespread famine.

Show me a man seeking the kingdom, and I will show you a man whom God supplies.

Step out in faith, not for your own advancement, but for the kingdom—asking God to come through for you—and marvel at his ability to give you everything you need.