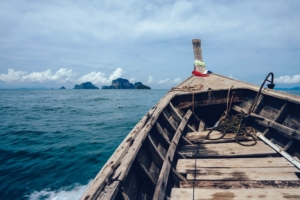 God’s kingdom advances because he is powerful. When the gospel came to Philippi (Acts 16:11-40), this was true in multiple ways.

Second, the Lord overcame an onslaught of persecution. For many days, a demon-possessed slave girl interrupted Paul’s preaching, but then he cast the demon out “in the name of Jesus Christ.” And then, once Paul was put in jail, the Lord sent an earthquake leading to the proclamation of the gospel to the jailer and his household.

Third, the Lord radically changed people in Philippi. Once converted, Lydia’s house became a center of hospitality for Paul and has traveling team as well as the first meeting place of the new church in Philippi. And after the jailer believed, he “took (Paul and Silas) the same hour of the night and washed their wounds; and he was baptized at once, he and all his family. Then he brought them up into his house and set food before them” (16:33-34).

Fourth, the Lord brought a diverse people together in Christ. Before the gospel came to Philippi, Lydia and her household wouldn’t have invited the jailer and his household over for anything! But God totally changed that (see verse 40).

What is the significance of the Phillipi story? Specifically, how does the reality of the Lord’s power in the advance of his kingdom speak to us?

First, it encourages us to persevere for Christ.

Luke and Acts are really a two-volume set written first of all to tell the story of Christ so that a believer named Theophilus (Luke 1:3; Acts 1:1), and all believers, would conclude, “The story of Jesus Christ is true! He’s worthy of our obedience! Everything is going just as God planned and promised! We shouldn’t quit on Jesus!”  The Philippi story fits right in and emphasizes the Lord’s power in the unfolding grand narrative of redemption.

When reading Acts, it’s tempting to only think about how it should inform missions, or church life, but the primary purpose is to reassure believers and to encourage us to press on.

Second, the truth of the Lord’s power in advancing his kingdom reminds us that the Lord is the hero of missions.

A missionary in a remote location in Central Asia went to a village hoping to share the Christmas story with a group of Muslims (see “An Incredible Story of God’s Saving Power” at www.jdgreear.com). Instead, he says, “I had wandered into something God was doing long before I arrived. Here was an unreached people group, in the most remote mountains of the world, isolated until just the past few years, worshipping Jesus together.” And he was told there were not just a few believers there, but as many as 200!

The missionary continues: “People like me shouldn’t get to see this. How do I get to see the birth of a church in a new people group? What did I do to deserve that? How could I possibly be qualified to be part of this? I can just imagine the conversation around the throne of God:

‘Really Lord, you want him there? Do you think that will work?’ one of the angels asks.

And God answers, ‘Well, yeah, his language is frankly sub-par; he isn’t exactly good at the work in general; but he is there. Besides, no one on earth is going to think he had anything to do with it, so it’s kind of how I work.’”

The missionary ultimately concluded, “Who could do something like this but our God?” Exactly! To the Lord alone be the glory in missions.

Third, the reality of the Lord’s power in his kingdom’s advance informs us of inspiring, steadying truth that we can share with missionaries right away.

I’ve met many missionaries and their families around the world. I promise you, the encouraging email you send is very appreciated. They might read it multiple times for days!

I hope you will read the Philippi story in Acts 16, and then share about our powerful Lord with a missionary who just might need to be revived. Missionaries feel their inadequacies daily and need reminded that the Lord they serve is omnipotent.