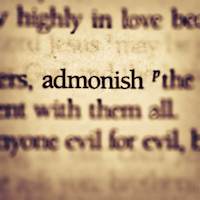 As we pulled into one of the gates at the Atlanta airport, I knew I would miss my connecting flight. Nevertheless, I sprinted through one of the world’s largest airports to a gate that was a few terminals away, hoping that I could still make it. I didn’t, so they put me on stand-by for a flight three hours later.

As I sat at my new gate, tired from a weekend of ministry, I noticed an unfriendly ticket agent who never quite made eye contact when she responded to anyone who spoke to her. The wrinkles on her face and the gray in her hair made me imagine that she had been dealing with frustrated travelers for many years. I watched as person after person spoke with her at the counter, and her demeanor never changed.

I did get a seat on the next plane to my hometown, and I noticed that the same gloomy lady from earlier was responsible for scanning the passengers’ boarding passes as they boarded the plane. When it was my turn to give her my ticket, to my surprise she asked, “How are you tonight?” Over the previous three hours, I had begun to feel a bit sorry for myself and so I took her question as a prime opportunity to express to somebody just how I was feeling. “I am absolutely exhausted,” I confessed. I was hoping my response would elicit some comforting words like, “Oh no, that’s too bad. I hope you get some rest on your flight home.” Instead, as she reached for the next person’s ticket, and without even looking at me, she replied in a stern tone, “Well so am I, but I guess we’re going to have to tough it out, aren’t we?”

As I walked down the tunnel toward the plane, I thought to myself, “That wasn’t very nice!” But as I settled into my seat and reflected on what had just transpired, I realized that she was absolutely right—I needed to stop being such a selfish wimp! Though I didn’t enjoy her admonishment, it was exactly what I needed.

Did you know that pastors are supposed to have a similar ministry toward their people, minus the unkindness? According to Paul in First Thessalonians 5:12, a characteristic of elders is that they “admonish” those under their care—they warn and correct their church members with God’s word. Even fellow believers are sometimes required to admonish one another (see 1 Thessalonians 5:14). Scripture isn’t always meant to comfort us. Sometimes it addresses us in our pride, or when we are thinking incorrectly, or behaving sinfully.

Toward the end of a ministry trip to Ethiopia, I began to notice an unbiblical pattern in the lives of the believers in one church: each time I arrived at the church building, they didn’t greet me with a holy kiss. This was very surprising because in all other venues, even in secular contexts, they greet one another with not only a handshake and sometimes a hug, but also touching cheeks, sometimes multiple times. But once within the church building, these typically friendly believers entered into what appeared to be their own private worship experience, to the neglect of the other believers around them.

I decided to admonish this church. When I announced what I intended to do, they sat up even more than usual, eager to receive the correction. I first reminded them about the Apostle Paul’s exhortations to greet one another with a holy kiss. I expressed to them how I didn’t see that happening when they gathered together. I mentioned the importance of “love” in the church, and how it is expressed through simple actions like greetings. I also reflected on the importance of showing Christ-like love toward one another so that unbelievers will know we are Christians. I even shared that on that particular day, not a single believer had greeted me.

How did they respond? As soon as I was done teaching, the people flooded the aisle to greet me. Two very old ladies must have kissed me 20 times on each cheek! It was a beautiful, perfect response to a fairly hard-hitting admonishment.

I’m sure you savor the times when a verse or passage of the Bible soothes your fears, or allays your worries. But what about those times when someone uses God’s word to confront a sin in your life, or an unbiblical idea? Are you just as quick to hear and love God’s word then?

The ear that listens to life-giving reproof will dwell among the wise. Whoever ignores instruction despises himself, but he who listens to reproof gains intelligence. (Proverbs 15:31-32)