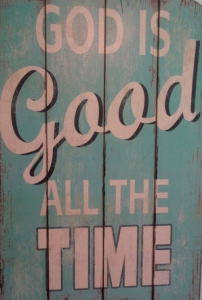 My daughter recently returned from a five-week medical mercy outreach to Madagascar with an internationally known Christian organization. Soon after arriving, and after witnessing an almost overwhelming level of poverty, hunger, and urgent medical needs, one of her co-volunteers expressed this thought: “I could never believe in a God who would allow this kind of suffering.” After receiving her email reporting this statement, I spent some time thinking about how I would have responded, and about how she might respond, given the opportunity.

She put it like this: “What would you say to someone who doesn’t believe in God because he would ‘never let suffering like this happen’?” This was my response:

Well, since your email about the person who said something like that, I have been thinking about it.

First of all, I would want to remind myself (and maybe the person, if the situation were appropriate) that unbelief always looks for an excuse: “A loving God would never allow such suffering,” or, “Christians are hypocrites,” or, “Evolution contradicts the Genesis account” . . . and so forth. The “suffering” excuse is really no different than the others. It all boils down to a person’s desire to determine their own reality and impose that on God, rather than accepting reality as it has been determined by God and explained in Scripture. In other words, it reveals an absence of faith and a prideful self-will.

Secondly, I would want the person to understand that suffering is the result of sin, both of Adam’s original sin, and of the sins of men following Adam’s pattern throughout the centuries. This is precisely why we see a difference in regions where the effects of sin have been, to some degree, counteracted by the effects of Christian thinking (mercy organizations, economic improvements, anti-corruption efforts in government, hospitals, universities started in the name of Christ that serve to educate, etc.). Where we do not have these kinds of influences, we see much more suffering because of the unmitigated effects of sin. All of this goes to prove that suffering is not “God’s fault” per se (not to deny His sovereignty over all), but rather the direct effect of sin—the result of the whole world being under the power of the evil one (1 John 5:19).

Thirdly, I would want to point out to the person that the cut-off between “acceptable” suffering and “unacceptable” suffering is arbitrary. In other words, would this person doubt God when God permitted him or her to suffer with a headache? What about one person getting cancer? How about 25 people killed in a bus accident? Or 2000 people killed in an earthquake? Or mass-starvation in a third-world country? Or genocide like the Holocaust? Where does one draw the line between “acceptable” suffering and the kind that rules out a loving God? If “suffering” is something that a loving God should not allow AT ALL, then unbelief is excusable even when someone stubs their toe or gets a hangnail. If “suffering” is permissible AT ALL, then certainly God is the only one qualified to determine its extent.

Just as God displays the evil of sin in the suffering and misery it produces, he also shows the goodness of His nature and character in people’s responses to the effects of sin. Apart from suffering, we would not see this aspect of God’s nature and character. Apart from suffering, we would have no reason to praise Jesus for the wonderful works of kindness and mercy He performed on sick and desperate people. Apart from the suffering that results from sin, we would have no reason to hope in an eternity without sorrow of tears, or to praise Jesus for delivering us from the evil one.

Remember the sign on your bedroom wall: God is Good All the Time.

I love you and am praying for you.