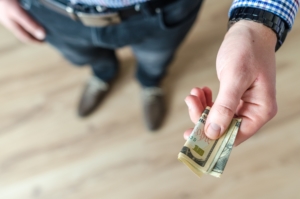 We always honked on the final turn as we left Fordyce, my birthplace, for Warren, Arkansas, my mother’s birthplace. “Miss Lula” lived in the neat little White House there—Miss Lula, “the giver.” She earned this reputation because of her lifelong generosity. That’s the way I’ll always think of her.

Miss Lula just had to give you something if you came to her home. I can still picture being there as a small child watching her look for just something, anything, to give us before we left her place. Thinking of nothing impressive, she briskly stepped into the kitchen only to bring out her new can opener. I’m not talking about anything fancy; just the metal opener you get from the grocery store. But she had to give it. It was her nature.

“Make friends for yourselves by means of the wealth of unrighteousness, so that when it fails, they will receive you into the eternal dwellings” (Luke 16:10).

Now that has to be one of the strangest commands that Christ ever gave us. Yet, I can say that Miss Lula did it masterfully. We’ll always think of her as our friend and will look forward to the reunion with her in the next world, because she endeared herself to us through the gifts she gave.

Jesus told a story prior to his command about an unjust steward who squandered the possessions of his master (Luke 16). When the steward was found out and was about to be dismissed from his job, he craftily made friends with others by reducing the debts they owed his master. Clever. In fact, even his rich master commented on his shrewdness and commended him for it.

“And his master praised the unrighteous manager because he had acted shrewdly; for the sons of this age are more shrewd in relation to their own kind than the sons of light” (v. 9).

When Jesus says that we are to make friends by unrighteous money so that they will welcome us in eternal dwellings, I’m convinced that Jesus’ command was for us to make friends with our kind, the sons of light. That makes perfect sense of the passage. In other words, give to believers.

The happy results are three-fold. First, it’s just enjoyable to give. Miss Lula loved it, and so do I. You’ve known the same joy. Second, you make true friends. Third, you enjoy that friendship in the next world. These are eternal bonds of friendship Christ is describing.

Not bad, just for using your Master’s money the way he told you to use it.

Think Of It This Way

Suppose a very wealthy man handed you a million dollars and said, “Here’s what I want you to do. This money is mine and I want you to use it as follows: give it away with love to believers in my name. Be thoughtful about it, pray for wisdom, but bless Christians, meet needs, further godly causes, encourage saddened saints, help repentant believers out of debt, and have fun while doing it. Also, you’ll have enough to live on while you carry out my command, but I want you to so appreciate the value of giving it that you will keep less for yourself and give more to others. In other words, I’m providing for your needs while you do my will. Will you do it?”

Do it? Of course you will. And that is no different than what God has done for you and asked of you. Give it to make friends (which is His command), like it really belongs to Another (because it does!).