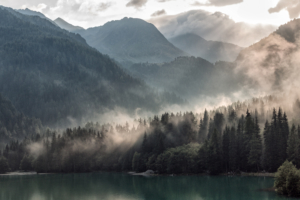 What is in a name anyway? Maybe you know what your name means, and it is something profound and wonderful. Or maybe your name means something less than fantastic like my name, Kole, which means “darkly-complexioned”. If you met me, it would be obvious that my complexion doesn’t match my name.

But what about Jesus? Is there any reason why he was given that name? Listen to what an angel of the Lord said to Joseph before the birth of Jesus, “Joseph, son of David, do not fear to take Mary as your wife, for that which is conceived in her is from the Holy Spirit. She will bear a son, and you shall call his name Jesus, for he will save his people from their sins” (Matt 1:20-21).

Did you catch that? Jesus was given his name because he would save. No wonder he is called the Savior in the Bible. Jesus is also the Greek way to say the Hebrew name, Joshua, which means “Yahweh is salvation”. The angel was clear—give him this name because he will save, he will deliver, he will rescue. There was no doubt it was going to happen.

Who did Jesus come to save? The Jews? Me? You? Notice it says that he came to save his people. Throughout the Old Testament, the Jews were the people of God, and it’s true Jesus came as the promised Jewish Messiah. Many Jews in the Bible thought this meant that Jesus came for them and them alone, but they were wrong. Later in the book of Matthew, Jesus himself will tell people to go into all nations to proclaim the gospel, because his people were now in every nation, not just one.

What a statement. This is why Jesus had to come into the world. God had been rescuing his people from all kinds of danger and opposition for thousands of years, but sins were a different animal. The verifiable wrongs against God from people in every nation demanded justice. But how would justice come? How would Jesus save his people from sin? Would he give them a good example to follow? Yes, of course he would, but that wasn’t enough.

As you keep reading in Matthew, the narrative takes a dark turn. Three times Jesus tells his disciples that he would soon suffer, die on a cross, and rise again on the third day. He said this because he knew that to save his people from sin he would have to suffer for them. Justice required it, and it happened on the cross—Jesus, who came to save, died to remove the penalty of sin and three days later climbed out of the grave.

“And there is salvation in no one else, for there is no other name under heaven given among men by which we must be saved.” Acts 4:12