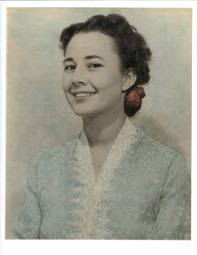 The last words Russell Deibler would say to his young wife were, “Remember one thing, dear: God said He would never leave us nor forsake us.”

That was on Friday, March 13th, 1942, when Russell Deibler was taken from the cottage where he, his wife, Darlene, and their missionary team were under house arrest. Darlene didn’t even have time to say goodbye. She thrust a pillowcase of belongings into her husband’s hands, listened to his parting words and determined not to let the Japanese soldiers see her cry.

As the truck carrying Russell traveled out of sight, she remembered specific prayer from her childhood. “Lord,” she had prayed, “I’d go anywhere with You, no matter what the cost.” Now, as a grown woman facing an uncertain future, Darlene restated her prayer: “With greater understanding I confirm to You tonight, it is still anywhere—I leave the costing to You.”

“Anywhere” would cost unimaginable suffering. Over the next four years Darlene would endure first separation from her husband and then widowhood, the brutal conditions of a WWII Japanese internment camp including near-starvation, forced labor, deplorable conditions, false accusations of espionage, serious illness, months of solitary confinement, and torture. Through it all, Darlene was sustained by God, who never left her nor forsook her, just as He had promised.

How did God sustain Darlene through her long ordeal?

Through the Word—When the news came to Darlene’s prison camp that Russell had died, she was understandably devastated. That night, alone on her thin mat in the barracks, God came to her through Scripture: “He hath sent me to bind up the broken hearted . . . to comfort all that mourn . . . to give unto them beauty for ashes, the oil of joy for mourning, the garment of praise for the spirit of heaviness” (Isaiah 61:1-3). “Experientially,” Darlene said, “I was beginning to understand the comfort of the Holy Spirit. . . . The sword of sorrow had pierced deep within me, but He had bathed the sword in oil.” Over and over the Holy Spirit would bring to mind memorized Scripture at just the right time to sustain her.

Through encouragement from other believers—God blessed Darlene by providing other believers in her prison barracks. Every morning and evening, they read the Bible, sang hymns and prayed together.  Serving and encouraging others helped distract the women from their own suffering, and created a feeling of community in the barracks.

Through prayer—Darlene learned what it meant to pray without ceasing. During her months of solitary confinement and daily interrogations, Darlene had a conversational stream of requests and praise going up at all times. She asked God for strength to endure, thanked Him for her daily portion of runny oatmeal and maggots, asked Him to heal her body and begged Him to protect her friends. Darlene realized her own powerlessness and cast herself completely on God.[1]

By taking every thought captive—Darlene had to learn the hard way of the danger of letting her imagination run wild. In solitary confinement, she drifted into what she called the “spiritually unprofitable game of suppose.”

“Suppose the Japanese do win the war, what then? Suppose Mother and Father are gone. Suppose my brothers are fighting in this war. What if none of us ever return home?” After only a few minutes of this thinking, Darlene would be plunged into despair. But again, God brought Scripture to mind, “The Lord is a strong tower: the righteous runneth into it and is safe.” Darlene remembered that Jesus was her defense; she could hope in Him and be ultimately safe. She decided to take no thought of tomorrow, but to live gratefully and dependently in the moment.

Despite her fears, Darlene would indeed return home, marry again and return to the mission field. God never left her nor forsook her. Looking back over the years that had cost her so much, Darlene was grateful. She said, quoting Charles Spurgeon, “I can thank my God for every storm that has wrecked me on the Rock, Jesus Christ.”