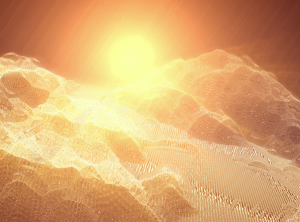 An acquaintance of mine died a couple of weeks ago. He was an interesting fellow, somewhat unique in his religious beliefs, as I remember. He seemed to have been quite influenced by a somewhat well known religious teacher who would sometimes stay at his house on his travels through the area.

Though I didn’t know him all that well, I ended up attending a memorial service at the grave site a few days after his death. There were a fair number of us—close friends and loose acquaintances. As we were milling around and waiting for things to begin, I noticed that the man’s sisters were taking things pretty hard. I also noted that the religious teacher had come and that, as well as I could judge from the intense expression on his face, it all seemed to be getting to him pretty deeply too.

Anyway, at this point, something crazy happened. The teacher got up, and after taking some time to comfort the sisters, stood next to the grave plot. He then somehow convinced the workers to actually haul the coffin back up to surface level and prop open the coffin lid. Naturally, we were all pretty shocked at this occurrence and wondered if we should call the police or something.

Then the teacher prayed. This part was quite amazing. He prayed with real faith, as if he really knew God. Even if what follows had not happened, I think I would still have been deeply affected just by the prayer.

But now comes the crazy part. He stood over the coffin and, in a strong, authoritative voice, told the man to get up. I know you may not believe me here, but the man actually got up out of the coffin and was taken home by his sisters. Most of us didn’t quite know what to do at that point. Personally, I drove home rather dazed and convinced that I had seen the most incredible thing of my life.

Well, you may be a bit disappointed (or relieved) to know that I made that story up. I have yet to see someone raised from death.

Really, though, I only half made it up. It’s essentially the story of Jesus raising Lazarus.

Why did I tell it? Mostly to help you remember how crazy it is.

The raising of Lazarus was Jesus’ pinnacle miracle. As his life marched on to its end, the stakes got higher and his teaching and miracles got more and more intense. This miracle was particularly polarizing. In John’s write-up of the story, he reports that many Jews who saw the miracle believed in Jesus. On the other hand, many others, namely the chief priests and Pharisees, viewed him as increasingly more of a threat and sought to kill him from that day forward.

You might also be interested to discover that most of the people throwing palm branches at the great triumphal entry were there because of this miracle. John remembers, “The crowd that had been with him when he called Lazarus out of the tomb and raised him from the dead continued to bear witness. The reason why the crowd went to meet him [at the triumphal entry] was that they heard he had done this sign” (John 12:17-18). It was a big deal.

This miracle was what John calls a “sign.” A sign, as I’m sure you know, is something that tells us about something else. In the car today, I saw a sign that said something like, “Gas station next right.” The sign in front of me was telling me about something I may not have known, or at least may not have been sure about. I also passed a rather non-descript building with a sign that read, “Chinese Express Restaurant,” informing me a little about the inside of the place. That was right after passing the golden arches of McDonald’s.

In the same way, the signs that Jesus did tell us something. In very shocking bright letters they read, “Jesus Came from God” and other similar things.

I realize that you weren’t there to see Lazarus come out of the tomb. You have to rely on the eyewitness accounts of others, just as you would have had to take my word for the story I told above.

But let’s just say for a minute that the whole Lazarus thing actually did happen. Will you believe what the sign is saying?