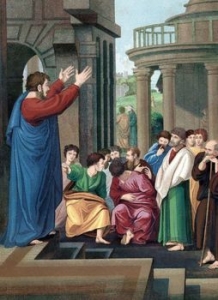 The disciples waited for the coming of the Spirit. It was only a few weeks following the resurrection when Christ told His apostles that “repentance for forgiveness of sins would be proclaimed in His name to all the nations, beginning from Jerusalem,” (Lk 24:47). But how?

Jesus laid the burden of this ministry squarely on the apostles. Imagine how they must have felt considering the scope of it all. But Jesus wasn’t actually trusting them alone to do the job. Not at all. Here’s what He said:

“And behold, I am sending forth the promise of My Father upon you; but you are to stay in the city until you are clothed with power from on high.” (Lk 24:49)

That’s what they waited for . . . the promise of the Father, the Holy Spirit, who would be the engine of worldwide evangelism. After this announcement, Jesus ascended to heaven, the place from which He had come years ago. The apostles waited, with several others, in Jerusalem for the power that would make it all possible.

The writer, Luke, retells the outline of this period in the book of Acts. Here he includes these famous words, a sentence which has inspired thousands to share the gospel.

“But you shall receive power when the Holy Spirit has come upon you; and you shall be My witnesses both in Jerusalem, and in all Judea and Samaria, and even to the remotest part of the earth.” (Acts 1:8)

They did wait for a week, praying, in Jerusalem. Then, on the day called Pentecost, the Spirit came . . . in a very dramatic way. The rest is history. The gospel was preached throughout the known world in Jerusalem, Judea, Samaria, and beyond—just as Jesus had predicted.

So what about this verse?

Acts 1:8 was for a special group of people—the apostles. That’s true. It’s not a mandate for you, but for those who were the witnesses of the resurrection of Christ and commissioned by Him. God calls the apostles “witnesses” all throughout Acts. These words were for the very people they were spoken to—His band of disciples.

Acts 1:8 is about a special geography—Jerusalem, Judea, Samaria and the rest of the earth. You don’t live in Jerusalem. Jerusalem isn’t St. Louis or San Diego. God had a onetime plan to expand the gospel through these special agents first to Jews and then to Samaritan and then to all other Gentiles. The book of Acts is testimony to this pattern being divinely intended. So, it isn’t right to use this verse for “our Jerusalem” because we don’t have one.

Acts 1:8 is about a special experience—the coming of the Spirit. This was a not-to-be-repeated moment in history when the Spirit came not for Jews alone, but to the entire world of people who trust Him. Pentecost won’t happen again. The Spirit now resides in each believer. But at that time, this was about new power for the inauguration of the advance of the gospel to all kinds of people. It was a spiritual explosion.

Don’t take Acts 1:8 to be about you, or your day, or your geography. It’s not a prediction about you, but one that has been fulfilled in the apostles.

But what about you?

You come in when Peter preached the message leading to the conversion of the 3,000 on that day of Pentecost, for the Spirit didn’t just come on the apostles, but on others who prayed in the upper room also. He also came on the 3,000 converts, and since then on every new believer. That means YOU. In the quoted Joel prophecy, Peter said that God’s Spirit will come on “men servants and maid servants” of all “mankind,” who will consequently speak out for Him (Acts 2:17-18).

So, yes, that great Acts 1:8 verse isn’t about you because you are not actually witnesses as Luke used the term (i.e. eyewitnesses to the resurrection). However, because of the Joel prophecy that Peter quotes, you also will speak out about Jesus Christ. The Spirit is empowering you to speak up. And that can happen right where you live.