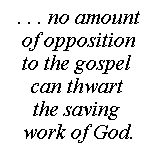 The proclamation of the gospel brings opposition to the gospel.

Paul nearly lost his life in Lystra at the hands of people who just hours earlier were foolishly worshipping him. While Paul was in that city preaching the gospel, “Jews came from Antioch and Iconium, and having persuaded the crowds, they stoned Paul and dragged him out of the city, supposing that he was dead” (Acts 14:19).

Paul wasn’t dead. He left Lystra, traveled to nearby Derbe to proclaim the gospel, and then amazingly “returned to Lystra and to Iconium and to Antioch, strengthening the souls of the disciples, encouraging them to continue in the faith, and saying that through many tribulations we must enter the kingdom of God” (14:21-22). When he told these new believers about tribulations as a prerequisite for entrance into the kingdom of God, he spoke from a vast amount of experience. Even before Paul’s beating in Lystra, opposition to the gospel was rampant on the first missionary journey (Acts 13-14):

“When they had gone through the whole island as far as Paphos, they came upon a certain magician, a Jewish false prophet named Bar-Jesus. He was with the proconsul, Sergius Paulus, a man of intelligence, who summoned Barnabas and Saul and sought to hear the word of God. But Elymas the magician . . . opposed them, seeking to turn the proconsul away from the faith.” (13:6-8)

“But when the Jews saw the crowds, they were filled with jealousy and began to contradict what was spoken by Paul, reviling him.” (13:45)

“But the Jews incited the devout women of high standing and the leading men of the city, stirred up persecution against Paul and Barnabas, and drove them out of their district.” (13:50)

“But the unbelieving Jews stirred up the Gentiles and poisoned their minds against the brothers.” (14:2)

“When an attempt was made by both Gentiles and Jews, with their rulers, to mistreat them and to stone them…” (14:5)

From the first missionary journey, there are a few lessons to learn about opposition to the gospel:

First, opposition to the gospel takes many forms.

Second, opposition to the gospel should not keep us from proclaiming it. It’s valuable to see how Paul and Barnabas responded to persecution. Sometimes they rebuked individuals (13:10-11). Other times they spoke out all the more boldly (14:3). Even when they knew it was God’s will to flee in order to escape a beating, they went elsewhere to preach the gospel (14:6-7). The example of these early missionaries should inspire us to keep speaking the truth about Christ in difficult circumstances. It may even be God’s will to take the gospel where the attacks will be persistent and possibly dangerous.

Third, no amount of opposition to the gospel can thwart the saving work of God. Because the unbelieving Jews in Antioch reviled Paul, he and Barnabas took the gospel to the Gentiles, “and as many as were appointed to eternal life believed” (13:48). When Paul and Barnabas returned to their sending church (in Syrian Antioch), they “gathered the church together” and “declared all that God had done with them, and how he had opened a door of faith to the Gentiles” (14:27) [emphasis mine]. God’s sovereignty in salvation is our hope as we go and our boast when we testify.