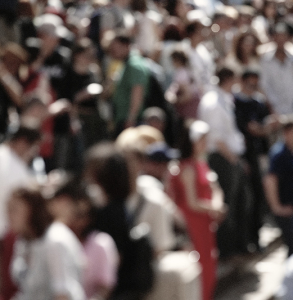 Read contemplatively, and even picture in your mind, the following glorious scene in heaven.

After this, I looked, and behold, a great multitude that no one could number, from every nation, from all tribes and peoples and languages, standing before the throne and before the Lamb, clothed in white robes, with palm branches in their hands, and crying out with a loud voice, “Salvation belongs to our God who sits on the throne, and to the Lamb!” (Revelation 7:9-10)

Four characteristics stand out about this “great multitude” of people in heaven:

First, they were countless. This may appear contradictory with what John “heard” earlier in the chapter: “And I heard the number of the sealed, 144,000, sealed from every tribe of the sons of Israel.” “144,000” does point to a fixed amount of believers, even though that is just a symbolic number. But from John’s perspective, as he looked upon the Lord’s people in heaven, their number was incalculable.

Second, they were from all over the world. Even though the previous verses (7:4-8) point back to the Jewish foundations of redemptive history, John saw an ethnically diverse crowd in verses 9-10. Salvation history was always moving forward to one Jewish man who went to the cross and “ransomed people for God from every tribe and language and people and nation” (Revelation 5:9). John saw the fruit of Christ’s suffering.

Third, they were “clothed in white robes.” What did their clothing symbolize? This probably refer to the attire of victors—similar to the martyrs of Revelation 6:11 who “were each given a white robe and told to rest a little longer until the number of their fellow servants and their brothers should be complete” (see 3:4). But their clothing probably also highlights the fact that “they have washed their robes and made them white in the blood of the Lamb” (7:14). “The blood of the Lamb” is a reference to Christ’s death on the cross for sinners. Though thoroughly stained with sin, they had gone to the Lamb of God to be cleansed (cf. 1 John 1:7).

Fourth, they were worshipping God and the Lamb. They stood “before the throne and before the Lamb…with palm branches in their hands.” The palm branches indicate this was a joyous celebration (cf. John 12:13), and of course it was—they were in the immediate presence of their God and the Lamb of God who took away their sin! It’s no wonder that they were “crying out with a loud voice, ‘Salvation belongs to our God who sits on the throne, and to the Lamb!’”

Revelation 6 ends with a description of judgment day at the end of history. It will be terrifying for all who have rejected Christ—rich or poor, powerful or weak, slave or free, all without Christ will run for their lives! But it will be too late, and they will not escape His wrath.

However, a question is asked in 6:17, “Who can stand?” In other words, who will be able to make it through the Day of Judgment unscathed? Revelation 7 provides the answer: all who have been sealed by God (a symbolic way of talking about God’s ownership and protection of his people), specifically those who have “washed their robes and made them white in the blood of the Lamb” (v. 14). Christ’s death and resurrection is your only protection against His wrath. If you repent of your sins and believe in the Lord Jesus Christ, you will one day join this throng around the throne. This is true no matter your skin color, nationality, cultural background, or even if you are one of the most wicked human beings on the earth. Jesus Christ is a welcoming Savior!

Are you a believer? Then the vision John received of this multitude should cause you to eagerly anticipate joining this throng around the throne. Revelation is not in our Bibles to help us create slick end-times charts; it’s meant to give us hope so that we endure to the end. Revelation 7 ends with further language about what heaven will be like for believers. Read these verses contemplatively also, and, once again, picture them in your mind. These truths are meant to motivate you on for Jesus until you join the thunderous voice around God’s throne.

Therefore they are before the throne of God,

and serve him day and night in his temple;

and he who sits on the throne will shelter them with his presence.

They shall hunger no more, neither thirst anymore;

The sun shall not strike them,

nor any scorching heat.

For the Lamb in the midst of the throne will be their shepherd,

And he will guide them to springs of living water,