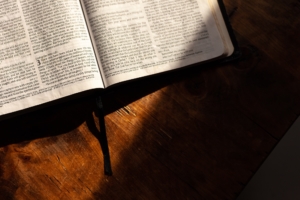 Have you ever wondered what certain renowned theologians are like behind the scenes in the privacy of their homes? Justin Poythress, son of New Testament scholar Vern Poythress, reflects back on his childhood and takes us inside his house to share about his “different” and “godly” father.

Every seminary professor or man in ministry knows his Bible, or at least would like to appear to know his Bible; so such a statement can seem a truism. Yet my exposure to this reality was more organic and thus made a stronger impression. We did morning and evening devotions as a family, and I knew my father read his Bible in the morning. But I also remember other occasions, such as Saturday afternoons, or evenings, or during vacation times, hearing—of all things—a sanctified hissing noise.

The noise would come from his bedroom, the door slightly ajar, and I discerned the cause of the hissing to be my father’s voice as he read the Bible to himself at a volume just above a whisper. The result, audible to someone outside the room, was a series of ‘s’ sounds echoing faintly in the hallway. When I peeked in, he would sometimes raise his eyes and offer the faintest smile before returning to the Scripture. He was always willing to be disturbed, but if left alone, he would proceed for long durations, reading large chunks in a sitting. (“Remarkable Bible Memorization,” www.crossway.org).

What was his father doing? Memorizing massive portions of Scripture! Poythress says he discovered that his dad had memorized “the entire New Testament, the Psalter, the second half of Isaiah, Ecclesiastes and the Song of Solomon, all the Minor Prophets, Ruth, and other select portions of Old Testament narrative,” about half of the Bible! And he notes that his father tries to keep these verses memorized by reviewing six chapters a day.

This story speaks to me in a number of ways. Perhaps you’ll resonate with my reflections.

First, I regret how little Scripture I’ve memorized compared to what I could have by now. I don’t mean that I should have memorized half of the Bible like Poythress. But I know that I have wasted too much time on trivial matters when I could have been taking in something so much better for my soul. I don’t want to dwell too long in this guilty state — just long enough to realize the self-inflicted losses so that I’m motivated to change.

Second, I’m eager to get back to memorizing large portions of Scripture. Through the years, I’ve done something like Poythress — memorizing by repetitive reading. I’ve also at times followed a more formal approach, promoted by pastor Andy Davis, in which you memorize one verse (or more) each day (see “An Approach to Extended Memorization of Scripture” at www.fbcdurham.org). You might prefer one method or the other. Perhaps the best motto is, “Whatever it takes!”

Third, I’m challenged to consider what my children have observed in my daily life around the house. Would they begin an article about me, as Justin Poythress did about his father, with, “Steve Burchett is a godly man,” and then connect my way of life with my intake of Scripture?

Fourth, I’m reminded of the necessity of regularly sacrificing what might be more enjoyable for what is most valuable. If you think memorizing is “fun,” then I’m sure you are in the minority! There are many more immediately pleasurable activities to do, and often we should be doing those things. Sometimes, however, it’s right to be all by yourself agonizing to memorize the next verse. Justin Poythress highlights this in his dad’s life.

A seminary employee recounted the following to me: Upon seeing Vern Poythress eating his lunch in the Machen dining hall by himself, the man observed that my father was whispering over a Bible.

“What are you doing?”

“Because it’s the next one.”

There’s never been a better time than now to start hissing with Dr. Poythress. Blessed will be that man or woman! (Psalm 1)