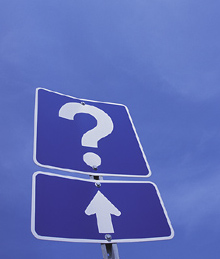 However, you may also remember the student who murmured, “Do we really have to do more homework? This teacher is a joke. Doesn’t he know I play sports and have a life?” The first student was asking questions, and the second was questioning. One was a learner, and one was a judge.

After being rescued from their slavery in Egypt, the nation of Israel asked God a few questions. One of them comes in Numbers 21:5: “And the people spoke out against God and against Moses, ‘Why have you brought us up out of Egypt to die in the wilderness? For there is no food and no water, and we loathe this worthless food.’”

The Hebrews had been traveling though the arid outdoors for some time now and had also been eating a steady diet of Manna. They were impatient on their journey (v.4) and were sick of eating the same seed-shaped substance, and they told Moses about it. Long trips with sub-standard food have a way of producing discontent. The Lord was not pleased with this line of questioning, and He sent fiery serpents among the people. Many died from their bites (v.6).

The people were being destroyed and cried to Moses, “We have sinned for we have spoken out against the Lord and against you,” (v.7). Moses prayed for the people and the Lord told him to make a fiery serpent to set on a pole (v.8). Any Israelite that had been bitten would look at the bronze serpent and live (v.9). Referencing this text, Paul tells the Corinthians, “We must not put Christ to the test, as [Israel] did, and were destroyed by serpents,” and, “these things happened to them as an example but they were written down for our instruction” (1 Cor. 10:9,11).

These ancient examples unfold for us the story of redemption, instructing our theology, and provide us with helpful moral lessons, instructing our practice. Following are three implications for our lives from this example of questioning Christ.

Israel assumes the worst possible motive for their deliverance from slavery. Have you brought us out here in the wilderness to die? They accused Moses and God of wrongdoing, having forgotten that they were only trouncing about the desert because they had sinned with the golden calf. What is revealed when God’s people question Him is that they do not trust Him. Have you trusted Christ with the circumstances he has brought you into, or have you been quick to question him?

The book of Hebrews generalizes the way Israel put God to the test in the wilderness by saying, “They were unable to enter because of unbelief,” (3:19). The sin that will always keep you from God is unbelief. How could the Israelites remain patient and content with God if they did not believe? They could not.

When their sin was realized, the people sought God quickly and honestly. They owned the fact that they had sinned in their questioning, and Moses prayed to God for them. God provided them a second serpent to take away the curse of the first. The charge was to look upon the second serpent, and those who looked certainly believed that healing would come when they did—and they were right.

Christ was tested by His people and provision was made for their sin. John records, “As Moses lifted up the serpent in the wilderness, so must the Son of Man be lifted up that whoever believes in him may have eternal life” (John 3:14-15). God provided a second Man (Jesus) to take away the curse of the first (Adam).

Have you been questioning Christ, doubting His purpose in your life, or distrusting His goodness in your current struggle or sickness? Have you been impatient and thought that God is no longer for you but against you? You must be zealous in repentance and look to Jesus lifted up.

For your doubting, he was raised, and for your testing, stayed—upon the cross to shed His blood, at which we stand amazed.