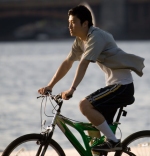 The missionary did not want to leave, but to stay would have meant risking not only his own life, but also the lives of his people.

Mao Tse-Tung, the communist leader of China, had ordered that all missionaries (or “spiritual aggressors,” as he called them) must leave the country immediately or forfeit their lives. Anyone who helped them would be punished—beaten, jailed or executed. Christianity had been outlawed. The Cultural Revolution had begun.

And so with a heavy heart and a few final words of comfort and exhortation, the missionary handed over his Bible to the village leaders and left the people he loved in the village by the Yellow river.

The village suffered terribly over the next forty years. There were droughts, famines and an oppressive, corrupt government. A whole generation died, and many of the young people moved away. But those that remained were faithful, even under persecution. The oldest villagers remembered the missionary and the words he taught, though they were just children when he left.

Every week the villagers would meet in secret to worship. They prayed together and sang hymns. At the end of the meeting they carefully brought the Scriptures out of their hiding place, unwrapping the layers of coverings over the Bible. Each one touched the book, but no one opened it.

None of the villagers could read.

Over and over, they prayed for God to send someone to read to them.

A few hundred miles away in the crowded city of Beijing, China, it was summer break at Beida University. Wang had three whole months to do just as he pleased, and he longed for an adventure. He decided to spend his vacation bicycling along the Yellow river into inland China, so that he might observe the culture of this remote part of the world.

Wang peddled his way through six provinces, finally coming to a small village that was so very poor—even compared to the other poor villages that Wang had seen on his trip—that he was shocked. The people dressed in rags, but were friendly and willing to talk with a stranger.

When the elders learned that a college student had wandered into the village, they rejoiced. Finally, their prayers had been answered. They begged Wang to read to them, and he agreed. He had no idea what book could possibly be so important to these poor peasants, but he was happy to oblige and flattered by the attention of the people.

The entire village gathered. The elder carefully unwrapped the Bible that the missionary had entrusted to them 40 years ago. Wang began to read the yellowed pages.

Night after night, as soon as the people came in from the fields, they gathered to listen. Wang read far into the night, but each time he tried to stop, the people begged him to continue. At dawn the people returned to the fields and Wang slept, only to repeat the performance again that evening.

Wang believed what he read, and he was never the same. As he bicycled back to Beijing at the end of his break, he knew that these poor villagers who had nothing had given him everything.

Story adapted from an account in A Heart for Freedom, by Chai Ling, pages 40-41