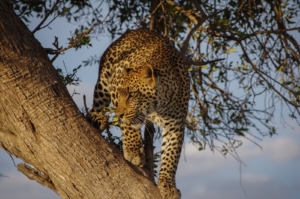 I recently had an interaction with a young man who was struggling with his obvious need to apologize for a particular pattern of sinning, but was reluctant to say “I’m sorry.” I confronted him with my assessment of the situation and asked him if there was anything I was misunderstanding.

He was very forthright, admitting everything he had been accused of, and confessing to me that he was finding it very difficult to apologize.

I appreciated his honesty, but was mildly surprised when he explained further why he was reluctant to say “I’m sorry.” I’m sure there was a bit of stubborn pride mixed in (which is what I had been expecting), but the main reason he gave was that he had apologized for the same kinds of sins numerous times before, only to return to them after a short while. He said he was afraid this would be just like the other times, and didn’t want to show himself to be a liar once again. When I read his response, my mind was immediately drawn to Jeremiah 13:23, where the LORD asks this of the rebellious Israelites:

Can the Ethiopian change his skin
or the leopard his spots?
Then also you can not do good
who are accustomed to do evil.

The obvious correlation to the Israelites was that it was in their nature to sin rather than to walk in obedience to God’s law. They could not just wish sin away, or resolve sin away, or apologize sin away. Apart from a change of nature, they would keep on sinning and inviting God’s wrath. The Jews of that day were taking pride in their distinction from other nations—a distinction that was physically evident through circumcision, but was increasingly indistinguishable in terms of the kinds of behavior that flowed from their hearts. Earlier in the same book of the Bible, God had said of Israel, “Behold the days are coming when I will punish all those who are circumcised merely in the flesh . . . and all the house of Israel is uncircumcised in heart.” They needed to be regenerated, made new by the Spirit of God. Apart from that change of nature—or, as John put it in his gospel, “Unless a man is born again” (John 3:3, 5)—they would never inherit the kingdom of God, but would instead go on sinning themselves to death.

So, with the leopard illustration from Jeremiah in mind, I wrote back to this young man.

If you’re interested to know, I can tell you why it keeps happening over and over. It’s because you cannot change your own nature, any more than a leopard can decide not to have a spotted coat. Your sins, like the leopard’s spots, come from inside of you, from your nature. But God can change you. He can make you into a young man who is not only forgiven, but changed on the inside . . . a young man who has a heart that wants to be truthful, hard-working, and of good character.

Do you remember the story in the Bible of the tax collector? He was so ashamed of his own sin that he could not even look up to heaven, but instead prayed, “Lord, have mercy on me, a sinner.” There’s no reason why you, a sinner like that man, cannot do the same. Humble yourself before God and pray that he will have mercy on you and change your heart. If you truly repent and believe in this way, you will be not only saved from the penalty for your sins, but also from the power of your sin . . . the power that you say seems to always make you keep coming back to the same kinds of behavior, making you out to be a liar. Jesus died on the cross to save, and change, sinners just like you. All he requires is humble repentance, and faith.

Perhaps you are in the same situation as that young man. You try to make yourself righteous. In moments of remorse and sincerity you say over and over, “I’m sorry. It won’t happen again.” But you just go on sinning. Nothing ever really changes. But everything could be different going forward if you were to truly humble yourself before God, repent of your sinful ways and put your trust in his Son, the perfect sacrifice who died to save sinners like you—not just from the wrath of God, but from slavery to the sin that invites his wrath. Your future could be so bright, and your eternity could be glorious and filled with joy.