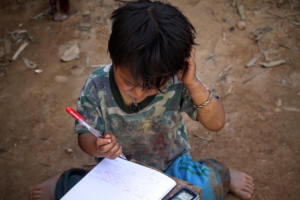 Don McClure was a missionary in Eastern Africa from 1928 until 1977, when he was shot and killed by militants in eastern Ethiopia. While living in one particular village, he and his wife, Lyda, provided schooling and housing for boys. One year, they were expecting 80, but 150 appeared. They somehow managed to take in 120.

Among those who stayed was a boy named Orop, known for his completely flat head on top. Though eager, Orop was unable to learn. After a year of schooling, McClure told him not to come back so that another boy could take his place.

Orop was undeterred. He continued to come to the school and would stand outside at the windows. McClure would tell stories about Jesus to the boys, and then Orop would go and find some other boys to tell the stories. But he told them inaccurately, leading to confusion in the village. The missionary had to intervene and forbid Orop from telling any more Bible stories!

In his biography about Don McClure, Charles Partee shares McClure’s own words about what he did next for Orop[1]:

Finally, I told Orop that when I went out to a village to preach, he could carry God’s Book (my Bible) for me… Every day he was waiting for me as the sun came up and would carry God’s Book to the designated village and gather the people, who would be singing hymns when I arrived. Orop was serving the Lord in the only way he knew how. He was always faithful in his task and proud of his part in it.

Yesterday a group of small boys were playing in the river when a crocodile grabbed one of them. The other boys ran away screaming, but Orop jumped into the water to fight the crocodile. He succeeded in freeing the boy who had been taken, but the crocodile seized Orop instead. I got to the river just in time to see the crocodile come up for air—with Orop in its mouth. I could not shoot then, but I followed the crocodile downriver and shot it when it came up again. Orop was gone. Greater love has no boy than to lay down his life for a friend.

They only recovered an arm and a leg of this heroic boy. But not even that is the end of Orop’s story. Here’s the final note from McClure.

I went to comfort Orop’s mother, and she said, “Orop told me that he was not afraid to die, because Jesus would come to take him by the hand and lead him home. Is this true?” When I told her that it was true, she asked, “Will you teach me about Jesus? I want to be with Orop and Jesus.”

Learning from Orop’s life, and death

Orop initially appeared to lack any significant role in the kingdom of God. He was even detrimental to the cause of Christ at one point! Yet he proved to be an eager, valuable member of Christ’s body. Even when he was told that he couldn’t teach, he gave himself wholeheartedly to other tasks for the gospel’s advance. And then his Christlikeness was ultimately seen in his sacrifice for others, and his influence lingered beyond his death.

Whether you have a PhD, or you didn’t even make it through elementary school, you matter to the health and ministry of the church. The Holy Spirit gives gifts to all believers, and empowers all to serve (1st Cor 12:7,11; 1st Pt 4:10-11). No believer is insignificant. No God-given ministry is irrelevant. No sacrifice for Christ is inconsequential.