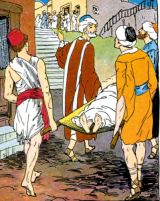 Four friends were sad. These young men had another friend who was paralyzed. That means he couldn’t walk. He couldn’t go outside, or help with chores, or even go to school unless someone carried him. All day long their friend lay on his mat, hoping for visitors.

It was hard work carrying the mat across town to where Jesus was staying. They had to be careful not to stumble or to bump their friend as they made their way through the crowded streets. It was hot outside and their friend seemed to get heavier and heavier as they carried him along.

Finally they arrived at the house, but they couldn’t get in. The house was already full. Jesus welcomed everyone from the important scribes to the lowly tax collectors, and it seemed that they were all there, along with everyone in between. The four friends couldn’t find a way to squeeze their paralyzed friend into the house.

I’m glad to tell you that the friends didn’t give up. They decided to climb up to the flat roof of the house to wait until Jesus finished. As they were waiting, one of the friends got an idea. Now I won’t tell you it was a safe idea, or that the owner of the home thought it was an especially nice thing to do, but those friends loved the paralyzed young man so much that they decided to do something drastic. They began digging a hole in the mud roof of the house!

Inside the house, the people began to hear digging sounds. First some dust sprinkled down from the ceiling, then some small clods of dirt, and then the people moved out of the way as some big sections of roof hit the floor with a thunk! They looked up and saw daylight outside, and then they saw four heads peering though the hole in the roof.

The four friends tied ropes to the mat and lowered their friend down to Jesus. Do you think Jesus was angry to be interrupted as He was teaching? Was He angry because of the mess? No, Jesus was happy to see that the four friends had faith—they believed He could help their paralyzed friend. Jesus said to the man on the mat, “Your sins are forgiven.”

Was that what you were expecting Jesus to say? I think everyone was surprised. The friends thought Jesus would heal the body of the paralyzed man. They hadn’t been thinking about what his soul needed. The scribes in the room were surprised, too. They thought, “How can Jesus forgive sins? Only God can do that.” They didn’t understand that Jesus is God.

Jesus knew what they were thinking. He said to the scribes, “Which is easier, to say ‘Your sins are forgiven,’ or to say ‘Take up your pallet and walk’? But so you will know that I have the right to say both, I’ll heal this man’s body.”

Did you know that you could be like the four friends in the story? You may not be able to carry someone to where Jesus is teaching, like they did, but you can bring a friend to Jesus in prayer. Do you know someone who isn’t trusting Jesus to take away his or her sin? You can pray that Jesus will forgive their sins and make them new inside. And how about you? Are you trusting Jesus to take away your sin? In the same way Jesus was pleased with the faith of the four friends, He will be pleased when you come to Him in faith.