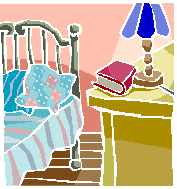 Life has led us through deep waters of painful transition but a few times. The latest (and most difficult thus far) is at flood stage.

In just four short years, Jenny, always a baby in ability, exchanged our home for the Conway Human Development Center. Empty nesters so quickly, we struggled.

Four more years brought God’s blessing of another child, a son. From birth, Barrett was the sunshine of our physical lives. A trio again, we incorporated the lifestyle modifications a wild and woolly baby demands.

Seasons flowed from one to another, seamlessly it now seems, until Jenny died at age 22. We reeled—and fought to adapt. Barrett grew on, gradually broadening the scope of independence through a series of mini-transitions over the next six-plus years. But this latest change, his move from our home to a rented house, has been the most painful of all. I can’t explain it here—and won’t try.

He spent his first night at the new place on Friday and moved more belongings the next day. Responding exactly as I did when Jenny died, I wandered about his room that night, touching remnants from the childhood he had left behind. Magazines, books, a set of darts . . . faint reminders of a relationship that was once so real but now permanently altered. Thus cast into a centrifuge of emotion, my mind spun with countless mistakes and errors, now irretrievable, made as a father.

Before falling into bed, I wrote:

“Tonight I will kneel beside the bed where he lay just two nights ago. I will stretch out my hands and feel the spot he always occupied with his cat sharing the foot of his cover. And I will grieve before God over my failures, over my harshness in my attempts to correct him and direct him. I will ask God to forgive the lack of love I often expressed toward the treasure He entrusted to me.

“I will stretch out my hands and feel for the body of the son beside whom I have often knelt and prayed, the son whose presence often drew me from a restful sleep in order to confirm his well being. But he will not be there—and I will weep over my loss. But I will nonetheless pray for his safety, his health and his security. And I will beseech God to do what I can no longer do—guard the purity and future of my son, my only son, the son who is more precious to me than anything else in the world.”

May God protect you and bless you and keep you, my son, as you make this first in a series of many painful transitions you must face in your own manhood.