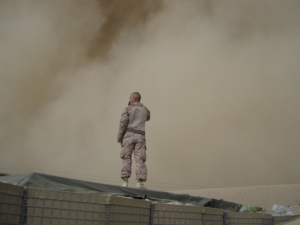 The little house was hopelessly surrounded. Innumerable soldiers with unimaginably powerful weapons prevented any hope of successful resistance or escape. Their Commander stood confidently and patiently, waiting for the barricaded rebel to show his face.

After many days, a small, unarmed man strode out of the house, folded his arms defiantly, puffed out his chest, and held his chin high. After surveying the scene with an attitude of calm disdain, he unfolded his arms and addressed the Commander with confidence and sincerity:

“I have been reading your Book, in which you have laid out your case against me, as well as your demand for my surrender. I cannot argue with your charges against me, but I have a few simple terms that must be met before I will hand myself over to your authority. You see, in your Book, along with presenting your unarguable case against me, you also describe yourself and your ways. Your creative genius and overwhelming power are evident. Your knowledge and wisdom clearly are without limits. You are, beyond question, sovereign over all, causing all things to come to pass according to your will. But in between what you reveal about yourself and the events brought about by your wisdom, power, and providence, I encountered dark, empty spaces—aspects of your character and ways where crucial information is simply not given, yet without which I am left wanting the necessary means to decide for myself if you are truly worthy of my unqualified devotion.

For example, you insist that you are good and that all your ways are perfect, and there is much evidence to corroborate those claims. But then you order the slaughter of entire enemy cities—even the children! I find this morally repulsive, and I find no intuitive way to reconcile these conflicting aspects of your revelation. Please explain how you can be uncompromisingly good, and yet do what I would estimate to be capricious and evil. Also, you command all men everywhere to repent and believe, and you promise eternal life to anyone who believes. But then you make it repeatedly plain that long ago you chose some from among mankind to be saved, leaving the rest to be condemned. If you have predetermined who will actually repent, and by logical extension, who will ultimately be condemned for not repenting, how can your invitation to all men to believe and be saved be genuine? Furthermore, how can those who do not repent be held accountable justly, since their refusal fulfills your sovereign decree? Why do you still find fault with them at the judgment? Who can resist your will? Furthermore, how am I to assess your treatment of Esau—chosen as the object of your disfavor while still in his mother’s womb with his twin brother, before either had done anything good or bad? Jacob you loved, but Esau you hated! But why? Please explain your basis for making this distinction so that I may rationally evaluate your motives. You also insist that you do not tempt anyone to sin, yet you hardened Pharaoh’s heart to sin, you stirred up David to sinfully number Israel, and you predestined the actions of those who murdered Jesus. How can both be true? Finally, how am I to assess your treatment of Job? Without cause you took away that righteous man’s possessions, children, and health. Job rightly understood that you, not Satan, were ultimately responsible for his calamity, but you never satisfactorily supplied your reasons for doing so.

You see, good sir, I am a man of significant reputation and intelligence, with numerous and important associates who, being aware of my investigation into this matter, will insist that I demonstrate sound reasoning for my capitulation to you and your demands. For me to endorse you without plausible explanations for what appear to be hopeless inconsistencies would be to commit intellectual and reputational suicide.

So here are my reasonable terms: I will happily surrender to you as a loyal subject if you will simply supply these missing pieces of information, thus allowing me to be fully informed before making such an important and consequential decision. Otherwise, for the sake of my reputation and self-esteem, I will remain appropriately undecided, withholding my unqualified approval of you and your ways.”

At this point the man stopped, re-folded his arms, and waited. The Commander, however, said nothing in reply (since all needful words regarding this matter are recorded in his Book). He simply raised his hand as a signal to delay the release of the deadly weapons aimed at this small, insolent man. The soldiers obeyed, but with difficulty.

After waiting for a few tense moments, the man shook his head and went inside. The Commander and his army patiently remained as they were, surrounding the man day by day, everywhere he went, even as he slept, weapons at the ready. As the man went about his life, he eventually failed even to take note of their continual presence.

Then one night, many years later, while the man slept, the Commander lowered his hand, and the weapons were released.