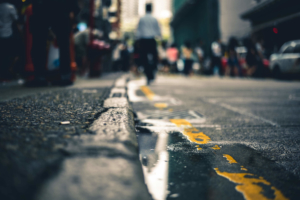 When the word “but” is used in a sentence to show a contrast between two true statements, the second statement is intuitively assigned the greater weight of influence by the reader, writer, hearer, or thinker. You may never have thought of this before, but you use it all the time in your day-to-day thinking, decision-making, and communication. Consider these examples:

Even without me telling you the outcomes, you would assume that Sarah probably resisted the temptation for a midnight snack, the cat escaped, and Johnny was comforted. However, if you simply reverse the order and put the second statements first, you would assume dramatically different outcomes. Sarah ends up fixing herself a sandwich, the dog catches the cat, and Johnny is still very much afraid even though he’s with his dad. The powerful preference we intuitively assign to the last statement in the sentence—the one after the word “but”—changes our overall perception of the situation without any change to the individual facts.

This grammatical factor becomes very important when we realize that our lives are filled with truths and realities—things that just are the way they are and cannot be changed. We constantly talk to ourselves about these things, comparing realities in our mind, weighing one against the other in determining whether we will be encouraged or discouraged, joyful or sad, overcoming or overwhelmed. What often makes the difference is not the realities themselves, but which one we put last in the sentence. We tend more toward encouragement, joy, and an overcoming mindset when we finish our thought with the better reality—the “first thing” in terms of influence or importance. In other words, since we tend to give the last part of the sentence the greater weight of importance, we do best when we put “first things” last.

One clear example of this in the Bible is found in Psalm 73:26. “My flesh and my heart may fail, but God is the strength of my heart and my portion forever.”  The structure of this sentence—two true statements contrasted using the word “but”—leads us to conclude that despite his frailty as a man, the psalmist was encouraged by his overall thought about God. It is true that his flesh and heart may fail, but the overcoming reality—the “first thing”—is that God, who will strengthen and sustain him (not just for the short-term, but forever), is all he truly needs. His weakness as a man is recognized, but then minimized by the encouraging truth about his powerful and sustaining God.

Switch the two parts of this encouraging assessment of reality, however, and the resulting condition in the psalmist’s mind would be completely different. Imagine the sentence with the “first thing” mentioned first: “God is the strength of my heart and my portion forever, but my flesh and my heart may fail.” The same two true statements are made with no change of wording in either one. The only thing I did was switch their order in the sentence. But what is conveyed by this version? Even though God is good, even though I anticipate his everlasting provision, I am left contemplating my weakness and potential failure as a man, making that reality seem much weightier. The result is a man consumed with himself and his problems, and God being relegated in his mind to a powerless doctrine.

So how do you tend to construct comparative sentences when you talk to yourself? As a Christian, your life is not a “bed of roses,” as they say, but is composed of both good and bad realities. Like the psalmist, you have personal weaknesses, circumstantial difficulties, and the potential for human failure. You cannot change your past or remove some of the consequences resulting from regrettable mistakes, and there is always the prospect of even greater difficulty in the future. You probably feel overwhelmed by these things at times. But those are all “last things”—realities of lesser weight or importance when compared to the “first things” every Christian can stand on—God and his steadfast love for his people, Christ and his unfailing work on behalf of his people, the Holy Spirit and his powerful work in his people. Do you dutifully mention these “first things” first, but then go away meditating anxiously on the “last things” that tend to depress and discourage? Or do you acknowledge the “last things,” then finish with and stand on the “first things” that bring joy, encouragement and an overcoming mindset?

If you are one who tends to put “first things” first and “last things” last, I hope you will choose the second sentence below as your response: