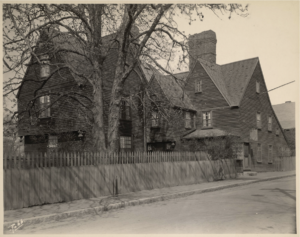 “This was to have been such a busy day!”

Judge Jaffrey Pyncheon, the antagonist in The House of Seven Gables, died with his eyes wide open while sitting in a chair. This striking event filling one entire chapter in the classic by Nathaniel Hawthorne surprises the reader since he was just moments from grasping his lifelong malevolent goal. The narrator colorfully lays out the appointments missed during the day and evening, all taking place while Judge Pyncheon remained unphased in the chair, watch ticking in his hand. The ticking of the watch indicates that time continues even when death interrupts the living one’s interaction with it.

Yet Martha of Bethany believed that Jesus has power over death. When her brother Lazarus died suddenly and Jesus came to her side later than expected, she said, “Lord, if you had been here, my brother would not have died. But even now I know that whatever you ask from God, God will give you” (John 11:21-22).

Her beliefs were confirmed but enlarged by Jesus immediately by what Jesus said. He said: “‘I am the resurrection and the life. Whoever believes in me, though he die, yet shall he live, and everyone who lives and believes in me shall never die’” (v 25).

This sentence above from Jesus seems confusing, but this is only so if we fail to see that Jesus is first stating what is true for the body of believers, and then second for the soul of believers. Let me explain.

You have heard that Jesus raised Lazarus after his talk with Martha, and that this was immensely important in the history of Jesus’ earthly life and ministry, just prior to Jesus’ own resurrection. It showed in a dramatic way that Christ indeed has power over the body to raise it from the dead. But Lazarus, though raised, died again. In essence, Lazarus experienced a resuscitation. What Jesus is saying in the above passage is even more profound than Lazarus’ resuscitation.

The Body of Believers. First he spoke of the body of believers: the bodies of Christians will die (unless they are alive when Jesus actually comes again). But, Jesus asserts here that the bodies of Christians will live again, this time being resurrected not temporarily but permanently. We know this will happen at the second coming of Christ. The fact of the death and resurrection of the believer is found in the phrase, “Whoever believes in me, though he die, yet shall he live . . .”

The Soul of Believers. Christ continues by affirming that all who believe in him will “never die.”

In other words, the life of God in the believers ARE NOT interrupted. They “never die.” While the believers in Christ live they have the life of Christ deposited in them. When death comes, that life isn’t shorted out or ended or phased out even temporarily. No, the life that is in the believer is continuous. Though the body experiences temporary death until the final resurrection, the life in the soul of each believer continues without any abatement throughout eternity, remaining forever from his or her conversion. This is what Jesus means when he says, “and everyone who lives and believes in me shall never die.”

This clears up the confusion — believers die physically but their bodies are brought to life at the resurrection; yet believers also never die because eternal life in the soul has been given to them.

The House of Seven Gables isn’t a story about conversion to Christ, though there are many spiritual overtones in the book, especially about the depravity of mankind. Judge Pyncheon is seen to be a highly respected person in the eyes of many, both in the church and the community. Yet Hawthorne pulls up the shades on his life by letting us see into his sinister plot and all-consuming evil. He was no believer. Therefore, death was indeed a divine interruption for him in every way. In a second of time, while sitting in a chair, he passed out of corporeal existence and into death, body and soul. There was a last breath and a last heartbeat.

If we also believe what Jesus taught concerning the future of unbelievers, Judge Pyncheon went immediately to hell.

Now, you may be too sophisticated to believe this though Jesus himself believed it and taught it. But you will be wrong. Death of the body will turn to a living eternal death of the soul for you if you do not believe. But living now by belief in Christ, you will live forever. Isn’t it time for you to think more soberly about this reality?

I am the resurrection and the life. Whoever believes in me, though he die, yet shall he live, and everyone who lives and believes in me shall never die. John 11:25