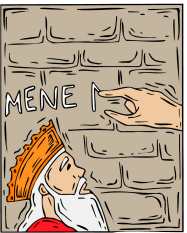 A long time ago in a city called Babylon, there lived a rich and powerful king named Belshazzar. Belshazzar’s grandfather had been a rich and powerful king, too. His name was Nebuchadnezzer. Long before our story begins, King Nebuchadnezzer had sent his army to a place called Judah, where the people worshipped the one true God. Nebuchadnezzer commanded his army to take away all the riches in Judah, the gold and silver, the fine clothing, and even the smartest and strongest young men to become servants of the king. Sometime after King Nebuchadnezzer died, his grandson Belshazzar became king. All the riches and servants his grandfather had gathered now belonged to him.

Now I’m sorry to tell you that Belshazzar behaved badly as king. Instead of thanking the one true God for his great riches, his kingdom and his family, he held a feast in honor of the gods that his country worshipped. (They weren’t really gods at all, of course, only statues made of gold, silver, wood or stone that couldn’t hear or see or know anything.) At the feast, Belshazzar told his servants to bring the special cups and dishes that his grandfather’s army had taken from the temple of the one true God in Judah. In front of 1,000 guests at his feast, Belshazzar used these very cups to drink wine in honor of the false gods.

Suddenly, Belshazzar saw something so frightening that his knees knocked together, his legs became weak and all the color drained from his face. A hand (just a hand with no body attached) began to write on the wall opposite the lamp in the room where the feast was held. Wouldn’t you be frightened to see such a thing? The fingers of the hand wrote four words on the wall, and then disappeared.

Belshazzar called for the wise men of the kingdom to tell him what the words meant, but none of them could read the message left by the hand! Now the king was even more frightened and his face became white as snow. He called for Daniel, a very old wise man who was, long ago, one of the young men kidnapped in Judah. Daniel had not forgotten the one true God; he worshipped and prayed to Him even though he was far from home and from the temple of God.

God told Daniel what the handwriting on the wall meant, and Daniel told the king. God saw what the king had done at his feast and had judged him. God would take his kingdom away. That very night, the king was murdered and someone else became the king of Babylon.

To people who love and obey Him, who believe that Jesus saves them even though they are not perfect, God said, “Do not fear, for I am with you. Do not be afraid, for I am your God. I will strengthen you and help you. I will uphold you with my righteous right hand.”