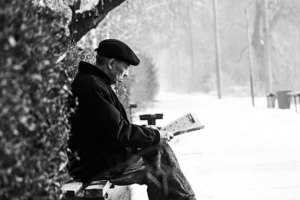 I first heard pastor and author Alistair Begg talk about T.S. Mooney when I was in college. He gives some details about Mooney’s life in his book Made For His Pleasure: Ten Benchmarks of a Vital Faith (Moody Press, 1996, pp. 55-57). Begg first met Mooney in 1979, and was invited by him to speak at the Londonderry Young People’s Convention in 1981. Mooney served as chairman of this gathering even into his late seventies. It was at this time that Mooney showed Begg his “rogues’ gallery” in his personal sitting room. All around were pictures of Mooney’s “rogues”—various boys he taught in a Bible class over a period of fifty years. Begg explains:

He wanted every boy that came to class to have: A Bible in his hand, A Savior in his heart, and A Purpose in his life… Some were by this time successful surgeons. It had been one of his ‘boys’ who had performed open-heart surgery on T.S. some years before. Others were school teachers, others in banking and commerce, a significant number in pastoral ministry, and all of them regularly in his prayers.

One morning in 1986, Mooney’s housekeeper found him dead on his bed. What was he doing just before he died?

He was fully dressed and had obviously begun his day as usual, because when others were called to help and they moved his body, they discovered that he had fallen on top of his prayer list. He had gone to heaven praying for his “rogues.”

Like T.S. Mooney, William Thomas had a heart for younger people, in particular fellow preachers of the gospel.

If he came across some young man with indication of ability and of God’s intention of making use of him, he would rejoice greatly. On one occasion a young man from Carmarthenshire came to Pyle to preach and had a fairly successful meeting. He was to sleep that evening at Tydraw [Thomas’ cottage]. After long conversation, they retired to their beds. After a while the young man heard a murmuring from the next room. Full of curiosity, he strained to hear and discovered that William Thomas was praying for him in the next room—pleading with God to grant him success on his journey, to keep him from falling, to make him an instrument for the salvation of many. After listening a long time, the young preacher fell asleep. He awoke some time later, only to hear the old man still at the same task and with the same object in view. As might be expected, the incident greatly affected the young man.

When I’m an Older Man

My wife tries to convince me that I’m not old yet, but here’s the reality: I’m also not in my twenties (or thirties!) anymore. I’m on my way to becoming an “older man,” and it has me wondering, “What kind of older man will I be?”

The examples of T.S. Mooney and William Thomas really help. Like them, I want to be an older man who disciples younger men with the confidence that the Lord will use them greatly in the future. Some men, as they grow older, become increasingly critical of younger believers. That’s such an unhelpful attitude. Instead, I want to teach younger men the Bible, believing they will grow and honor Jesus. And I plan on having thousands of thoughtful conversations with them. And I’ll aim to demonstrate godliness before them. This wasn’t only Mooney’s and Thomas’ approach, but it was also Paul’s (2 Tim 2:2) and Christ’s (Mk 3:14).

Additionally, Mooney and Thomas prayed for others fervently. I’ve seen this in other elderly people—that when they just couldn’t do anything else, they could still pray. We may never know the far-reaching, kingdom-advancing effects the prayers of older saints have had.

Most of us probably don’t have the time Mooney had to pray for so many individuals each day (he was unmarried, after all), and perhaps we shouldn’t make “praying through the night” like Thomas did a regular expectation. But most of us, if we’re still not “older,” would do well to become more intentional now about praying for others, so that the discipline is already in place when we’re older. I confess I’m weak in this area, but inspired to “get with it.” I’m sure there’s an app that could aid this, but just a plain small journal might be what any of us need to begin writing names down for the purpose of regularly taking them to the Lord in prayer.

I’ve been told that becoming an older man guarantees more aches and pains. I hope it also means more hopeful discipling, and more earnest prayer. May the Lord help me.