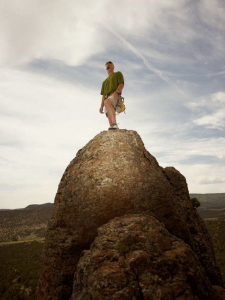 Americans like to champion the “American Dream,” which, I would say, is being able to be whoever you want. For most people, being whoever you want means being great; being famous; being rich and well-known. But as I carry on through life and study more of the Bible, I’m slowly realizing that “greatness” may not be for everyone.

When I was in high school I felt a very distinct call to be a musician/songwriter who used music as a medium to share the gospel. In my naive young mind I perceived this as coming to fruition in being famous and part of a popular rock band. I hit college and beyond, began to realize it wouldn’t be that easy, and suddenly found myself re-evaluating my heart motives.

Had I become too “Hollywood” in my approach to God’s call on my life? What if sharing the gospel through music meant I never went beyond the city I was living in?

Since then I’ve been wrestling with this idea that I may never achieve “greatness” as I had fondly dreamed of it. I found my wife in the same boat. She had gone through ministry training passionate and ready to change the world. Then, after graduating, it became apparent that no change would be a simple change.

I don’t know, maybe most of us aren’t meant to be great.

In the Bible you see all these famous heroes of faith: Abraham, Moses, David, Isaiah, the apostles, Paul…and, understandably, we want to emulate them. Nothing wrong with that! But do you ever notice the people around them? Most likely not. Did you know Jacob and Esau probably had other brothers? Do we ever hear of any of them specifically? Erm…not really. Did you know there were probably more than 12 disciples hanging around Jesus? There are at least 70-72 at one point. Do we get to know these people? By and large, no. Are they less important? Well, no, they existed for a reason, but do we know their names and associate them with great acts of faith? Ah hmm….

Maybe most of us are meant to live modest lives–unsung and unknown by the generations after us. Maybe “greatness” for most of us isn’t being famous, but simply living well. Maybe most Christians are better off not dreaming about being the next Billy Graham and instead loving their neighbor like they love themselves. Maybe the Church should focus on raising Christians who live quietly in their communities, making a small impact where they are, instead of charging everyone to go out and conquer the world for Jesus.

Maybe there’s less “glory” in that. Maybe it seems messier and harder. But such a route is worthwhile. I think if more Christians simply made themselves available where they are, their impact would be much more far-reaching and “greater” than if they had tried to be someone famous.

There’s something to say for the “little” people, those inconspicuous beings simply living life the way God intended them to do in Christ. I think in heaven those will be some of the “greatest” stories we’ll share.