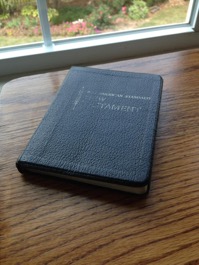 I just received this New Testament Thursday, 35 years late. It had been a gift from my wife with a very special note inside.

I thought I lost the New Testament 35 years ago in an airplane. I recall feeling sad about it, but praying some good would come of it. It turns out that a businessman found it in a hotel room and took it to his office. He intended to send it to the address inside.

He didn’t— at least for 35 years. He moved it from office to home at retirement in 1995. Recently, at 84, he ran across it again. Writing a note of explanation, he sent it to the address inside, which was my old address in Orlando.

The renter there found the NT on his doorstep a few weeks ago. He happened to be a believer—and not just a believer, but a church planter.

Darrel had planted a church in Georgia, but came to Orlando after his wife passed away, along with two young children. Darrel found my name, and called me in Kansas City. What a surprise! It turns out that we have several mutual friends.

Darrel is a member of a church in Orlando along with several dear friends of mine including Ray and Libby. I arranged for them and Darrel to get to know each other.

So I now have my New Testament, a third of a century late, along with a great story, a new friend, and a new relationship for my Orlando friends.

When you read a story like the one above, we’re all prone to say, “That was such a great providence.” And it was. But what do we mean by that?

Really, “providence” is everything. I mean, it’s the way we talk about all the ways a loving and holy God oversees our lives and all his creation for his purposes, and, in the case of believers, for our good. But the things that come our way aren’t all inherently good. Some of them are awful dilemmas and difficult matters. We often wish we had never encountered them. At least it all appears this way at first look. But, it’s our commitment to God that we will trust him to work in all our futures for his glory.

I knew one man in Chicago who spent the rest of his life in a bed after a shooting occurred that had nothing to do with him. He received a bullet meant for someone else while he was standing at an intersection downtown. What can we say about this? He said that he preferred being in his bed for the rest of his life since the bullet was the means by which he came to know Christ, and that is far better than a life on his feet without Christ. Amazing, isn’t it?

The biblical character, Joseph, saw the hand of God’s providence when he was sold by his brothers and taken to Egypt. The hard circumstances of his life were God’s way of preserving his people. Joseph could see that and rejoiced in all that happened. “You meant it for evil, but God meant it for good.” It’s hard to explain a man like that.

Providence is the Sovereign God personally ruling over his creation to carry out his perfect plan. From our side life seems like the underside of a tapestry, as author Edith Schaeffer used to remind us. But from God’s side, he rules according to divine plan and brings about a beautiful work of art in the end for his honor. All of his providential care for his world results in glory to Him, to whom it belongs. We ourselves will recognize that it would not be right to attribute glory to any human in that day, but only to God. God knows that already.

Though we may not be able to understand fully all the ins and outs of his involvement in his world, we can say, as believers, that “God causes all things to work together for good to those who love God, to those who are called according to His purpose.” Romans 8:28 is as true today as the day it was written. What a comfort that is as the difficult things come into our lives. When that dark providence appears, the clouds which seem so threatening, the “frowning providence” that Cowper wrote about, we have to remember that we signed up to be believers. Let’s encourage each other to be that, even when it’s hard to understand.