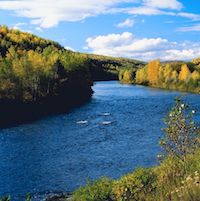 The Bible begins with a simple statement of fact: “In the beginning, God created the heavens and the earth” (Gen. 1:1). There are no commands given to men right away, no moral expectations—just this amazing fact. We live in, and are part of, a creation. We call the world around us “nature,” but it is not at all “natural,” at least not in the sense that it just happened. It did not merely come about. All that exists was created—fashioned by God in His infinite wisdom and power.

Starting with that simple yet profound fact, join me in following the progression of logic the Bible presents regarding creation. It is not necessarily in the order of the individual books, but it is there nonetheless, and unarguably clear.

The fact is, God created everything. The logical derivative from that fact is that God deserves to be praised and honored . . . He deserves to be worshiped! And this is precisely what we read near the end of the Bible, in Revelation 4:11.

Worthy are you, our Lord and our God, to receive glory and honor and power, for you created all things, and by your will they existed and were created.

Because He created all things, He is worthy to be worshiped. No leap in logic there, but rather basic, don’t you think? After all, we praise people for designing and building nice houses, or for sculpting great works of art, or painting the ceilings of old churches. We honor them for “creating” these things, don’t we? So why, when considering the immeasurably stretched out heavens and the vastness of the sea and all its life, and the grandeur of the great mountain ranges, the intricacy of the snowflake and the ingenious workings of even the tiniest creatures, the design of the human body—things that make the most clever works of man look like a child’s mud-pie art by comparison—would we not ascribe praise to the Maker of it all? Why would we not see in all of these creations evidence for the majesty of the Creator? We do—we would—we should—if we were thinking rationally.

But man does not think rationally. Ever since the entrance of sin into the world, as the Bible says, mankind “exchanged the truth about God for a lie and worshiped and served the creature rather than the Creator, who is blessed forever!” (Rom. 1:25). Imagine praising the artwork on the ceiling of the Sistine Chapel rather than Michelangelo, the artist who created it. Imagine honoring the painted metal body of a ’65 Ford Mustang rather Donald N. Frey, than the man who designed it. The creator deserves the praise, not the thing created. It is irrational to adore and praise the lesser thing—the thing created—while ignoring the obviously superior—the creator. It simply doesn’t make sense. It is also evil—immoral. God makes this plain in His response to men who choose to worship the creation rather than the Creator. They experience His wrath rather than His favor (see Rom. 1:18-32).

But the biblical logic goes further. Who is this God? Who is the person who created all of this? Who is worthy of your worship? John 1, Colossians 1, and 1 Corinthians 8 reveal that He is “the Word,” “the image of the invisible God,” the Son. We know Him as Jesus Christ, God incarnate. The same person who walked with the twelve, offended the religious leaders, died on the cross, rose from the grave, and is now seated in glory as the ruler over all, was “in the beginning” with God. “Without him was not anything made that was made” (John 1:3).

Furthermore, creation implies ownership, and ownership implies authority. Everything around you is His possession. You are His possession. He made you, and He owns you. He thereby has the right to command you, just as He commands the rest of His creation—just as He said, “Hush, be still” to the raging storm as His disciples watched in fear (Mark 4:35-41). The difference is, the wind and the sea have no rebellious spirit. The clouds and the mountains and the sand and the rivers and the stars in heaven do exactly as their Creator directs them—without question or hesitation. But men in their slavery to sin resist and rebel, twisting reality into a delusion of self-rule and the worship of self and things. Raging against God and against His Christ, even against logic itself, they create their own “kingdoms” of paper and straw, ready to be quickly consumed by the coming fires of God’s wrath . . . unless they come to their senses, recognize their status as creations of the Almighty God, and humble themselves in worshiping and serving their Creator.

The fact is, nothing else makes any sense.