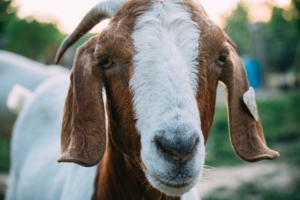 A recent news report told about two robbery suspects who were being pursued by the police in a third-world country. When the officers rounded a corner, seconds behind the fleeing suspects, all they saw was a goat. The robbers had vanished. What the officers did next can only be explained as a product of their superstitious culture: They arrested the goat, believing it to be one of their suspects, demonically transformed in order to avoid being captured. When the article was printed, the goat was still being detained.

The only thing that would have made this story more bizarre is if the animal arrested had been a sheep! Goats, after all, are known for unrighteous behavior, but sheep are known for doing what is good.

You probably know the biblical account I am alluding to. It is found in Matthew 25:31-46, and it describes the final judgment of all people. The Lord Jesus will be seated on His glorious throne with all His angels around Him, and He will separate the sheep from the goats. The sheep will enter into eternal life, while the goats will be consigned to eternal punishment.

The most sobering aspect of this judgment is the way the Lord will separate one group from the other. Even though Jesus fully accomplished the justification of His people by his substitutionary death on the cross and graciously applied that salvation to them through faith alone, on that day He will separate them from unbelievers according to their deeds.

When you stand before the Lord Jesus Christ on the day of judgment (and you will be there, along with all people), the decisive factor in distinguishing you from unbelievers will not be a sinner’s prayer you once prayed, a baptism you experienced, your membership in a local church, or even your sincere profession of faith in Jesus Christ. On that day, the Lord will place you in one category or the other—sheep or goat, bound for heaven or hell—according to the way lived your life. This aspect of the final judgment is not only explained in Matthew 25. It permeates Scripture.

Jesus once said that “an hour is coming, in which all who are in the tombs will hear His voice and will come forth; those who did the good deeds to a resurrection of life, those who committed the evil deeds to a resurrection of judgment” (John 5:28-29). The same truth is taught in Matthew 12:37, where a person’s words are said to be the criteria. It is also found in Matthew 16:27, 2 Corinthians 5:10, Revelation 20:12-13, and Romans 2:5-11.

Are these passages teaching that salvation is by good deeds rather than by faith? Not at all! The final judgment will not involve a cosmic scale on which good deeds are weighed against bad in order to see who scored enough points to get into heaven. Passages that speak of judgment according to deeds simply reveal the fact that on the day of judgment, the evidence of faith will be what the Lord examines, not merely the claim of faith.

Faith alone saves, but the proof of saving faith is its performance. What you do validates your claim to believe.

If you are having difficulty harmonizing “judgment according to deeds” with “salvation by grace through faith,” consider the following illustration:

The same is true with respect to the final separation of mankind. On that day the Lord will separate . . .

Regardless of which of the above contrasts the Lord chose to illuminate on that final day, the division of mankind would be the same. The same people would end up on His right (the “sheep”) and the same on His left (the “goats”). The Bible tells us, however, that the Lord has chosen to divide mankind by examining the last contrast in the list: the contrast of behavior.

So, you claim to be a sheep. That’s fine, but are you walking like a sheep? Are you living in righteousness, holiness, faithfulness, and love? If not, then I hope the old saying (usually applied to ducks but also fitting for goats) will serve as a warning: If it walks like a goat . . . . I’m sure you know the rest.