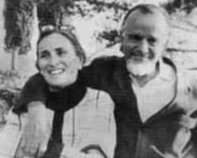 Edith Seville was ready for a fight. The announced topic for the young people’s meeting in her liberal Presbyterian church was “How I know that Jesus is Not the Son of God, and How I Know that the Bible is not the Word of God.” The speaker was confident that everyone in the room either agreed with his heretical premise or could be easily persuaded to do so. Edith, on the other hand, was determined to challenge him. She listened carefully, mentally preparing what she would say in rebuttal to his remarks. As far as she knew, she was the only Bible-believing Christian in the room.

Just as the speaker finished and before Edith could get to her feet, someone else stood up. “My name is Francis Schaeffer,” he said, “and I want to say that I know Jesus is the Son of God, and He is also my Savior.” As soon as Francis finished describing his personal experience with God, Edith jumped up and added a brief apologetic for the truth of the Bible. That night, June 26th, 1932, began a pattern that would continue for the next fifty-two years—Francis and Edith would work together, each contributing what the other lacked, to defend the authenticity of the Bible and to model the present reality of the Christian life.

Francis and Edith began dating that very night, and married in 1935. In the beginning, Edith worked as a seamstress in order to help pay for Francis’ seminary tuition. Every day he would come home from seminary and share what he was learning with Edith. This practice, coupled with Edith’s extensive reading, gave her an informal seminary education as Francis earned his degree. After Francis graduated and became a pastor, Edith participated in his ministry by teaching children’s Bible classes in their home.

Just after World War II, Francis and Edith decided to move to Switzerland to help strengthen the few, isolated churches in Europe who still taught the Gospel. Francis worked tirelessly in what was called the “Separated Movement,” a group of churches in the U.S. and Europe who left liberal denominational affiliations over the issue of the inerrancy of the Bible. But after several years in this work, he came to a crisis point. He noticed that, though these churches clung to correct doctrine, often there was no love or kindness demonstrated in relationships among the members. People within the movement were quick to turn on each other and divide over doctrinal minutia. Worse yet, he noticed even in himself a love for theological debate that had less to do with compassion for the lost and more to do with gamesmanship and self-righteousness.

As Edith prayed for him, Francis spent the next few weeks pacing the hayloft over the chalet in which his family was living. He went all the way back to his agnostic roots and rethought his reasons for believing in God. He studied Jesus’ words about how believers should live. In his book True Spirituality, he sums up his conclusions this way:

In the midst of being right, if self is exalted, my fellowship with God can be destroyed. It is not wrong to be right, but it is wrong to have the wrong attitude in being right, and to forget that my relationship with my fellow man must always be personal. . . . Christianity is not love in abstraction, but to love the individual who stands before me in a person-to-person relationship. He must never be faceless to me or I am denying everything I say I believe.1

The Schaeffers went on to demonstrate their new focus by ending financial ties to the Separated Movement and beginning a ministry called L’Abri, or “The Shelter.” Tucked away in a Swiss chalet near a ski resort, the Schaeffers prayed that God would bring the right people to them—ones who needed answers to their questions about God. They did not solicit for funds or advertise, but trusted God to meet their needs as a demonstration of His power. People from all over the world began trickling into L’Abri to get “honest answers for honest questions” and to live for a time in the Schaeffers’ home. Edith was in charge of running the household and overseeing the preparation of nutritious meals. Often she would teach a visitor something about Christ as they worked alongside each other baking bread or tending the gardens. Francis met with enquirers individually, led group discussions and preached.

In the meantime, Francis’ books and articles gained a loyal following in the United States and around the world. He was in demand as a speaker, especially on college campuses, and earned the title “Missionary to the Intellectual.” Edith was busy writing at this time, too. While Francis’ books discussed the culture, philosophy and apologetics, Edith’s books centered on the home, prayer, and the history of L’Abri. Francis said that to understand their ministry and philosophy, one must read both her books and his—they completed each other in print, just as they completed each other in life.

Today, there are seven L’Abri study centers continuing the work begun by Francis and Edith Schaeffer. More than 20 of their books are still in print, along with many books written about them. Perhaps an equal legacy is the impact they had in the lives of individuals they encountered one by one, over a cup of tea or a bowl of hearty soup—an impact we can hope to replicate as God brings individuals in need of spiritual shelter into our own sphere of influence.
____________________
1Schaeffer, Francis True Spirituality 1971 Tyndale House Publishers, Wheaton IL pg. 152 and 157