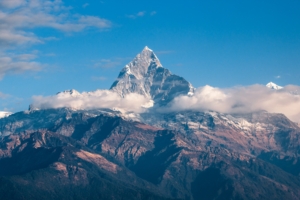 “All things have been handed over to me by my father; and no one knows the Son except the Father; nor does anyone know the Father except the Son, and anyone to whom the Son wills to reveal him.” Matthew 11:27

It is almost impossible for us to fathom what Jesus is saying in the above statement. All things? Really?

Yes, he means all things have been given over to him. A study of the Scripture will reveal that this world, and this universe, are the Son’s project. The Father has given him authority, including the authority to create and sustain the universe itself. He spoke the worlds into existence. The writer of Hebrews, the Apostle John and the Apostle Paul make clear that Jesus was the agent of creation (Heb 1:2; John 1:1-2; Col 1:16). So, when Moses wrote in Genesis 1:1, “God created the heavens and the earth,” the New Testament teaches that this was the Son’s work in tandem with the Father’s decree. Jesus said, “All authority has been given to me in heaven and in earth” (Matthew 28:18).

As Redeemer of his people, he has been exalted as the God/man to the highest position of authority possible:

Therefore, God also highly exalted him, and bestowed on him the name which is above every name, so that at the name of Jesus every knee will bow, of those who are in heaven and on earth and under the earth, and that every tongue will confess that Jesus Christ is LORD, to the glory of God the Father. Philippians 2:9-11

He reigns now in heaven. Paul says that Christ is

. . . far above all rule and authority and power and dominion, and every name that is named, not only in this age but also in the one to come. Ephesians 1:21

What This Means to You

Do you realize how foolish it is to resist such authority? Do you? In a Psalm which speaks of authority, Psalm 2, the writer speaks to earthly authorities with these words.

So now, O kings, show insight; take warning, O judges of the earth. Serve Yahweh with fear and rejoice with trembling. Kiss the Son, lest he become angry, and you perish in the way, for his wrath may soon be kindled. How blessed are all who take refuge in Him!

The most powerful authorities in this world are under Yahweh’s wrath and will one day experience the power of that wrath in a place of eternal punishment. If you are a believer you have take this warning seriously, worship the Son, and live in him with both joy and fear. We are those who are blessed because we have taken refuge in Christ, the one who died and rose again!

Submitting to his Lordship, rather than our own, is not just a one-time event, but a lifestyle. We fail too often, yes, but the heart of the one who looks to him as Lord of all displays both submission to him in substantive ways and longing to submit perfectly. That will only happen fully in the eternal future, but for now, in this weak body, our failures disappoint us while our hearts simultaneously are tuned to his Lordship. We identify as his people, submitting to his authority forever. The Christian life is characterized not only by a beginning with Christ as Lord, but an ongoing progression of submission to the true Lord of the universe. The center of our devotion is to this Lord. We obey because we want to. Does that describe you?

True Christians are changed people, and are given a new heart that loves this obedience even though we fail out of weakness.

A story was told about a young child who was told not to spit in the house, a new and novel habit he had acquired. When finally disciplined the child said in defiance, with tears, “I’m not spitting on the outside, but I’m spitting on the inside!” This reveals something of the stubbornness of the human heart. More discipline may create conformity, but it is the heart that matters. Those who take refuge in him love to obey, and are broken-hearted when they disobey. They do not chafe at the concept of submitting to Christ’s lordship.

Mankind is divided into two categories: those who submit to Christ’s lordship and those who don’t. That’s for now. One day, as Paul said, “everyknee shall bow.” We will not escape the authority of Christ, but we are wise to submit, from the heart, before that day when it will no longer be possible.