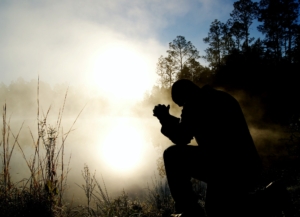 Christians must be people who pray with audacity, not because we deserve an answer, but because God will give it. When one of Jesus’ followers requested of Him, “Lord, teach us to pray just as John also taught his disciples,” Jesus’ response was two-fold. He first gave an example of how we ought to pray, and then he told a story about a man who desired bread from a friend.

“Suppose one of you has a friend, and goes to him at midnight and says to him, ‘Friend, lend me three loaves; for a friend of mine has come to me from a journey, and I have nothing to set before him’; and from inside he answers and says, ‘Do not bother me; the door has already been shut and my children and I are in bed; I cannot get up and give you anything.’ I tell you, even though he will not get up and give him anything because he is his friend, yet because of his persistence [shamelessness, audacity] he will get up and give him as much as he needs.”

To grasp the object of this story, we need to define one word—”because of his persistence (NASB).” The original word literally means “lack of sensitivity to what is proper.” Shamelessness and audacity (boldness in going against what seems normal) come close. The idea of persistence could possibly be included, but it is not the best translation because it is not Jesus’ main point. In other words, Jesus’ describes this man’s action in coming to his friend and knocking on his door in the middle of the night as audacious.

Now here is the contrast Jesus was pointing out: if that unrighteous man would get up and give you bread at midnight even though he did not want to, how much more will God, who delights in His children and never sleeps, give all that is needed to those who simply have the shamelessness to ask Him?

Our asking is not grounded on what we deserve. That is the point. We deserve nothing. Godly audacity is asking even though we do not deserve it—asking because we believe that God will not withhold any good thing from his people. And Godly audacity is asking for great things even though they may seem to be too great—asking because we know that God delights to give vast gifts to those who trust Him. “If you then, being evil, know how to give good gifts to your children,” Jesus continued, “how much more will your heavenly Father give the Holy Spirit to those who ask Him?”

We must pray with boldness and daring, not trusting our worthiness, but trusting in God’s goodness.