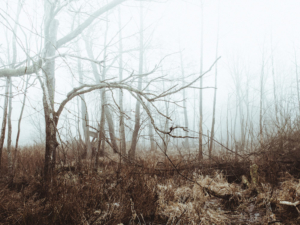 A confident man once invited the most inexperienced person in the church out for evangelism at a local park. On the drive over, they prayed and strategized a few conversation starters. The inexperienced member remained a bit fuzzy on what passages of Scripture to reference, and as he gazed out the window, he began to wish he hadn’t eaten breakfast that morning. The thought of talking to someone about the Lord, or talking to anyone about anything really, gave him the heebie jeebies.

Immediately, upon arrival, the confident man found an older gentleman and quickly learned that he attended another church. Pleasantries were exchanged, and they parted ways. The confident man remarked that it was nice to find other believers in the city you had never met before. The inexperienced member hoped that they wouldn’t find anyone else to speak to.

Just then, a middle-aged lady, sporting the same haircut as her fuzzy little dog, walked up and began to talk. The inexperienced member, at the encouraging nod of the confident man, began to ask her questions about Jesus. She was immediately adamant that Jesus never claimed that he was the only way to God, even citing Bible passages that she thought proved her point. The inexperienced member fumbled his words a bit and couldn’t seem to say anything that the woman didn’t have a better answer for.

Finally, out of desperation, he said, “Jesus did say in the Bible, “I am the way, the proof, and the light.” The woman quickly retorted, “I’ve never read that before!” The inexperienced man nervously flipped through his aged Gideon New Testament, trying to find the verse he had misquoted. The confident man looked on in hope that this sorry sap would somehow open to John 14, but he never found it, and the woman left surer than ever that she was correct.

As she toddled away with her pint-sized pooch, the confident man looked his inexperienced brother in the eye and said, “You know if you had read John 14 before you would have known what the verse actually said and where it was found. That woman may have stayed to hear more of the gospel. I can see that you are not cut out for our church.” As they walked back to the car, the inexperienced man thought he heard the confident man mutter, “What a failure!”

The inexperienced man vowed to never evangelize again, and left the church.

You should be thinking now, “What a mean guy! How unthinkable! Why didn’t he just help him?” I’m sure you would never do something so brash, but what is your attitude toward those in your churches that are weak and fail in ways you don’t?

What about the parents who didn’t raise their children with the same standards you did because they didn’t understand or thought they knew better, and now their kids are having big-time issues—what a FAILURE.

Or, the foolish man who consistently mismanaged his finances and is now drowning in debt—what a FAILURE.

What about the person who understands particle physics who, again, has succumbed to his doubts about inerrancy—what a FAILURE.

Or, the young woman who gets visibly angry with her husband on Sunday after she confessed to you that week that she needed help with her temper and wanted to change—what a FAILURE.

Churches are rife with weak people, and you are charged to bear with them and help them. You are encouraged to love one another as Christ has loved you, and a key way that happens is through the extension of merciful strength and aid in the face of failure. This is not to say we don’t offer good counsel and exhort believers toward holiness and wisdom, but we do it with our necks under our brother’s yoke of weakness, not from the sideline.

Weakness matters to you because you have it, even if not many know for certain what yours is. It matters because Jesus came and got his people when they were weak and is now in the full-time business of shepherding them as they depend on Him. The world is full of people who put the weak one down, who overlook the hard cases, who consider themselves strong and crush the weak. For the Christian, there is a more excellent way.

We who are strong have an obligation to bear with the failings of the weak, and not to please ourselves. Romans 15:1

And we urge you, brothers, admonish the idle, encourage the fainthearted, help the weak, be patient with them all. 1 Thessalonians 5:14