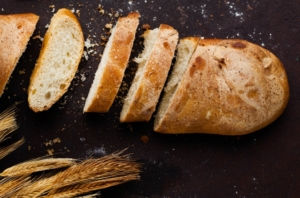 The Gentile woman’s daughter was demon-possessed. Having heard about Jesus from others and learning that he was in her region of Tyre and Sidon, she came and begged him to cast out the unclean spirit.

Jesus’ response at first sounds less than gracious, even harsh: “Let the children be fed first, for it is not right to take the children’s bread and throw it to the dogs” (Mark 7:27). Jesus didn’t shy away from using the typical designations of his time. “The children” were the Jews, and “the dogs” were Gentiles.

Rather than taking offense at Jesus’ designation of her people, or even disagreeing with him, the woman readily admitted the rightness of his assessment of God’s redemptive priority, worded elsewhere like this: “to the Jew first, and also to the Greek” (Romans 1:16). She also seemed to recognize what we might tend to overlook, that Jesus did not say “Let the children be fed only, and let the dogs go hungry.” Jesus said the children were to be fed first, with room later in God’s plan for others.

But even in recognizing what was in Jesus’ reply, she brought to light something else that wasn’t. She agreed with Jesus—“Yes, Lord;”—then appealed on behalf of her daughter using a common household illustration . . . “yet even the dogs under the table eat the children’s crumbs” (v. 28). Being unwilling to wait for her daughter’s deliverance until the children had been fed, and being confident in God’s omnipresent abundance, she brought out the fact that even while the children are being fed, there is enough for others in the form of overflow—plenty of crumbs of grace and mercy.

Jesus responded to her clever persistence exactly as her faith knew he could, by casting the demon out of her daughter. There was indeed plenty of grace and mercy to feed the children (i.e., the Jews), with leftovers for this Gentile woman and her daughter.

A fascinating aspect to this account is where it sits in the context of Jesus’ ministry in Mark’s gospel. Jesus had recently fed five thousand men (possibly indicating a much larger number when women and children are counted). He did so by miraculously transforming five loaves and two fish into enough food for the multitude, with twelve baskets of broken pieces (i.e., crumbs) left over (6:30-44). Not long after the incident with this Gentile woman, Jesus again fed a multitude, this time transforming seven loaves and a few fish into enough food for four thousand. Again, there was much excess, with seven large baskets of broken pieces being gathered after everyone had been satisfied (8:1-9). In each case the excess was far greater than the amount Jesus started with!

After the second miraculous feeding incident, Jesus’ disciples worried that they had not brought enough bread with them for a journey across the lake. Jesus, seemingly incredulous, rebuked them soundly for their failure to understand. “Why are you discussing the fact that you have no bread?” (8:17). He then reminded them of both feeding miracles, as well as the quantity of excess each time, ending his rebuke by asking, “Do you not yet understand?” (8:17-21).

What was it that Jesus expected them to understand, having seen all that they had seen? What did the Gentile woman perceive about him that they did not, having only heard about him from others? What was the substantive difference between her response and theirs?

The difference was faith. The disciples believed, but at a very elementary and dim level, still too hardened in their hearts (6:52; 7:17) to fully abandon themselves to confidence in him and God’s purpose for him. Even after this, when Peter confessed “You are the Christ,” he then rebuked Jesus for talking about his upcoming suffering and death (8:29; 31-32). Whatever faith they had at this point was immature, at best.

The Gentile woman on the other hand, though far less informed than the disciples, simply believed. She had been told about Jesus, believed who he was, and acted on her faith. As Matthew records, Jesus responded to the woman’s appeal, “O woman, great is your faith! Be it done for you as you desire” (Matt. 15:28).

She did not argue with Jesus about God’s redemptive purpose for the Messiah, sending him to the Jews first in keeping with his age-old promises to his people, then grafting the Gentiles into the rich root of that tree of promised blessings (cf. Romans 11:13-24; Ephesians 2:11-22). But she believed that in God’s abundant goodness and mercy, as personified in Jesus, there were plenty of “crumbs” for her and her daughter.

There are more than enough “crumbs” of mercy for you too, and for all who will simply believe in Jesus. God in his infinite goodness never runs out of the capacity to save those who believe. “For God so loved the world, that he gave his only Son, that whoever believes in him should not perish but have eternal life” (John 3:16).