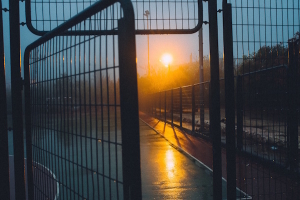 I noticed the billboard from a distance, its message becoming clearer as I approached. It was an advertisement for a fast food chain’s newest gourmet French fries, smothered in cheese and bacon, with “bacon” forming part of its name (and as everyone knows, you can NEVER have too much bacon!). There was, of course, a picture of the tempting treat designed to activate the neuron pathway from my eyes to my brain to my taste buds to my stomach, then back to my brain and ultimately to my hand (which would reach for my wallet). The advertiser’s goal was to lure the remnants of the fast-food junkie in me to take the next freeway exit and drive to the strategically situated drive-through window where the convenience of my debit card would finish me off. So far, so good, from an advertising perspective.

I came close to merging right, but then I noticed three words above the picture: “Good. Then Gone.” Over the next few milliseconds, the rational side of my brain began to gain ground. “These fries must be served in small portions,” I thought. “Perhaps they’re tasty, with all that bacon and cheese on top, but the pleasure would only last for a few moments. No long-term satisfaction here, at least not the kind that will get me through another fifty miles of freeway driving. Yeah, I’m sure they’re good, but then they’re gone—kind of like those ‘fun-sized’ chocolate bars—just big enough to tease my taste buds, but incapable of providing true satisfaction.” Perhaps I shouldn’t admit this, but if I’m going to cave in and indulge in something like this billboard was advertising, I want it to be big enough to last a while—big enough to share (even if I have no intention of sharing it).

So I kept driving, and thinking. The advertiser’s ploy was undoubtedly to say, “They’re so good you’ll devour them quickly.” Certainly this is true. Had I purchased these fries, they, along with the satisfaction they were claiming to provide, would likely have been gone even before I got back up to freeway speed. But in expressing this as a means of temptation, the advertiser had unknowingly exposed the weakness of temptation for those who are willing to see past the initial presentation and rationally evaluate the facts.

When we are tempted to sin, it is for the supposed reward of pleasure that cannot last. It seems good at the time, but then it’s gone.

This is why the Bible makes so much of the decision set before each one of us in this life: Enjoy the sinful and temporary pleasures of this life now—have your reward here, in other words—or resist temptation here as you anticipate the true and lasting pleasure of eternal life. On one side of this decision is worldliness, living according to the flesh. On the other side is godliness—the life of faith in Christ, the steadfast practice of setting your hope on what He has promised to those who walk with Him in righteousness and wait for Him in faithfulness, enduring any and all associated difficulties as He did, while resisting the temptation to indulge in the temporary fleshly pleasures of the here and now, as He also did. Moses, for example, is commended as a man of great faith because he chose “rather to endure ill treatment with the people of God than to enjoy the passing pleasures of sin” (Heb. 11:25).

Is your temptation in this life to acquire financial wealth or earthly possessions? Is it to idle away your life in selfish leisure or a quest for entertainment? Is it for the pleasures of sexual sin? Is it for worldly popularity or power? Whatever it is—whatever pleasure you have or hope to enjoy through these kinds of worldly, fleshly temptations, it will not last. It will be good, then gone, leaving you with guilt and shame and remorse. In the end, if you spend your life pursuing these temporary pleasures, you will find yourself destitute of all satisfaction and joy, rightly anticipating nothing but the wrath of God.

Heed these words from Jesus as you consider the choice set before you:

For what will it profit a man if he gains the whole world and forfeits his soul? Or what will a man give in exchange for his soul? For the Son of Man is going to come in the glory of His Father with His angels, and will then repay every man according to his deeds. (Matt. 16:25-27)