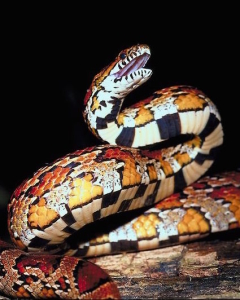 Not a single godly person could be found. At least, that’s how the psalmist felt.

Save, O Lord, for the godly one is gone;

for the faithful have vanished from among the children of man. (Ps 12:1)

He used exaggerated language to make a point: rampant, pervasive ungodliness was found everywhere he looked! “On every side the wicked prowl” (v. 8). The evidence was indisputable.

Everyone utters lies to his neighbor;

with flattering lips and a double heart they speak. (v. 2)

Individuals said one thing to one person, but then the exact opposite to someone else. They said what they thought people wanted to hear even if they didn’t really mean it. This was a society pervaded with dishonesty and deception. Nobody talked about subjects like the almighty God of Abraham, Isaac, and Jacob, or God’s faithfulness in events like the exodus, or the responsibility to love their neighbors.

Furthermore, these ungodly people declared, “With our tongue we will prevail, our lips are with us; who is master over us?” (v. 3). They bowed to no one and assumed that they would always conquer with their deceptive words. Even worse, they harmed the poor and needy for personal gain (v. 5), and they gloried in such depravity—“vileness is exalted among the children of man” (v. 8).

The psalmist lived in a dark, ugly world.

This all sounds so…familiar! Think about our country. Where are the godly? Where are the people who deny themselves, take up their crosses, and follow Christ (Mk 8:34)? The percentage of true disciples is dreadfully low.

And wouldn’t you agree that people’s speech is frequently dishonest? I’m not just talking about political ads! I have in mind journalists who sensationalize the story instead of telling it accurately. Or online sellers who intentionally mislead potential buyers. Or car mechanics who insist you need a major repair even though you only went in for a twenty-minute oil change. Or the coach who says, “I would never leave this school,” only to jet for the riches of the new position one week later. Or the boyfriend who sweet-talks the girl for physical pleasure.

Additionally, arrogance abounds all around us. Administrators tell parents, “Our school is easily the best in the region.” Financial gurus insist their strategy will lead to prosperity. Worse still, the weak are harmed daily in our country for a profit. Think of the abortion industry, or the thousands of young women that are made sex slaves. Even the disabled are exploited for hundreds of dollars, and sometimes thousands.

“On every side the wicked prowl, as vileness is exalted among the children of man!” How will we ever survive in the midst of such depravity?

First, cry out to the Lord. Perhaps the politics at work are totally unfair and godless, or a relative is intentionally mismanaging family affairs to make you appear greedy. Surely in those types of situations we should pray for the Lord to intervene in such a way that all wickedness ceases and righteousness reigns (vv. 3-4), but sometimes we may only be able to squeak out, “Help, Lord!” The Lord hears even that simple plea. Through Christ, we have a Father who loves to give “good things to those who ask him” (Mt 7:11).

“Because the poor are plundered, because the needy groan, I will

now arise, “ says the Lord; “I will place him in the safety for

In response to the psalmist’s prayers (vv. 1, 3-4), the Lord promised to answer. But will He really arise and protect? Can His word be trusted? The psalmist declares, “The words of the Lord are pure words, like silver refined in a furnace on the ground, purified seven times” (v. 6). As opposed to man’s deceptive, hurtful words (vv. 2, 4), the Lord’s word is untainted by falsehood or deception. When the Lord makes a promise, He always acts on it. The psalmist believed this (v. 7), and so should we.

Henry Law concludes helpfully, “While falsehood, deceit, and wrong abound in evil men, the faithful Word is near to comfort. No insincerity pollutes it. It is pure from all alloy, as silver perfectly refined. It has been the staff of many suffering pilgrims, and it never fails. It will sustain when other props are gone” (www.gracegems.com, study on Psalm 12).