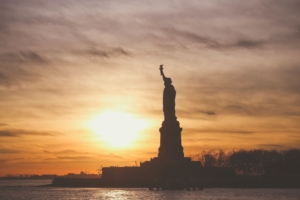 Have you ever felt like an outsider? I vividly remember a certain experience from my time living in another country. As my wife and I looked for a place to eat a picnic, we wandered into an area that was somewhat unsafe due to political tensions. After we sat down, some children came over to watch us eat. They acted friendly at first, but quickly became antagonistic. The situation climaxed as we started to walk away and they, waiting until our backs were turned, began to throw rocks at us. The message was clear: You aren’t welcome here because you aren’t one of us.

We are all looking for a home, a place where we are welcome. A time lapse of human history would make the world look like a swarming ant hole. We humans are migrants at heart because, whatever the immediate occasion of our movement, we are searching for a place that we can call home. For just this reason, many of our forefathers landed on American shores. And in the same way, refugees from all over the world—Somalia, Syria, Sudan, Burma, and more—are now arriving in our cities. In 2016, nearly 85,000 people who were forced from their homes by war and political upheaval entered the United States.[1]

Their stories are heartbreaking. I remember a Burmese woman, who lives just a few blocks from me, recounting how her sister and her sister’s baby had drowned in a river as they fled the war zone. Her brother had been shot in battle. Another told me, almost matter-of-factly in his broken English, about how government forces had entered his town with machine guns. Many have lived in UN refugee camps for years, even decades. Some are Christian, some are Muslim; some were rich, some are poor; some are educated, some are not; but they all have this in common: they weren’t welcome, they didn’t belong. So they moved on.

Are they welcome here?

The nations are living in our neighborhoods and this is an opportunity for Christ’s church. We have a country that is relatively peaceful. Can we receive them warmly into it? We have a society that gives opportunities for hard work and a stable life. Can we help them join in? We have a little bit of extra space where they might, just possibly, have a home.

But welcoming them to the U.S. is only part of the opportunity that we have been given.

America is no lasting home for us or for our new neighbors. “Here [on this earth], we have no lasting city,” the New Testament teaches, but we look for a city “whose builder and maker is God.” As strangers and exiles, we wait for a new creation in which righteousness dwells.

If this is true, we have a different kind of welcoming to do. Yes, we should receive them as our neighbors and lovingly invite them into their new earthly home. But more than this, as they are battered and bruised by the turmoil of this world, we can invite them to a better home and better world—a world in which justice and peace remain forever.

[1] This brief article it’s not a statement about refugee policy, but about what we should do as Christians for those who have come to our country.