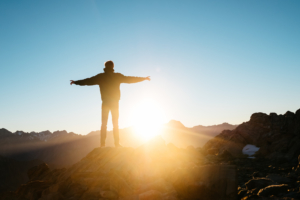 I remember once, before I was a believer in Jesus, when I looked at pornography. I wanted to do it. As my hand moved the mouse, my mind got dark and cloudy, my head throbbed, and I hardened my heart and yielded to the driving desires of my body. I became an animal and I let my lusts rule me.

It was a kind of death. I wasn’t dying on the outside, but the symptoms of death were there inside—mental inertia, weakness, corruption.

I’ve experienced the same feeling at other times, when I’ve gotten angry, when I’ve lied, when I’ve been jealous, greedy, or cruel.

Listen to how Paul described sinful behavior to the Ephesians: “. . . in the passions of our flesh, carrying out the desires of the body and the mind . . . darkened in their understanding . . . have become callous and have given themselves up to sensuality, greedy to practice every kind of impurity . . . corrupt through deceitful desires . . .” (Ephesians 2:3; 4:18-19)

Sin is a kind of death, a death inside. This is why Paul can tell the Gentiles at Ephesus, “You were dead in your trespasses and sins” (Eph. 2:2). When we sin, we cease to function correctly as God’s creatures. Perhaps even physical death is a final result of this inward malfunction.

So how can we get up out of death and live? This is where the Christian message speaks hope. It tells us that Jesus did it. He was dead and then he stepped out of death into life. And the power that made that happen can work in your life too.

The thing you have to realize, though, is that resurrection doesn’t all happen at once. It goes inside-out. The inner person comes first and then the outer person (the body) someday in the future.

I think Paul is referring to the inner person when he says that “God . . . even though we were dead in trespasses and sins, made us alive together with Christ” (Eph. 2:5). You see, those of us who are dead inside because of sin can somehow get connected with Jesus so that his resurrection takes not only him but us from death to life. We can be “made alive with Christ” and that can begin to happen now.

Another way we could talk about this is with the term “resurrection power.” We see it in chapter 1, where Paul prays for the Ephesians:

“. . . that you may know . . . what is the immeasurable greatness of his power toward us who believe, according to the working of his great might that he worked in Christ when he raised him from the dead and seated him at his right hand in the heavenly places . . .” (Eph. 1:18-20)

God is at work in us in an incredibly powerful way. It is the same power that God worked in Jesus when he raised him from the dead. This is resurrection power, and the first place we see its effectiveness, as we saw from chapter 2, is inside of us.

Those who follow Jesus can experience the power of his resurrection in their lives every day. We can put away the deeds of darkness and we can live a new life of righteousness. Our job is to learn to believe this and act it out.