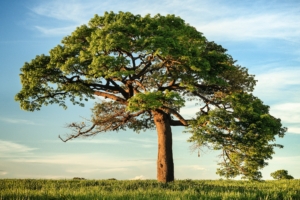 The story of Jesus seeking and saving Zacchaeus is found in Luke 19:1-10. The song, quoted above and throughout, is sung by children throughout the English-speaking church world. It memorably summarizes the Zacchaeus story, so let’s use it to interact with the biblical account.

According to Luke 19:3, Zacchaeus was “small of stature.” The average height of a Jewish man in that day was about five and a half feet, so he must have been more like five feet — maybe shorter! If he looked forward in the middle of a crowd, he saw lots of necks and shoulders and backs.

But he was not a “spunky, cute little guy.” Rather, he was a wicked oppressor of people: “He was a chief tax collector and was rich” (v. 2). Zacchaeus was the boss of the men who collected both legitimate and illegitimate taxes from the populace. Further, he was a Jew working against his countrymen on behalf of the Roman government, making him a hated man. He was therefore a highly unlikely candidate in the eyes of his fellow Jews for what transpired with Jesus.

“He climbed up in a sycamore tree for the Lord he wanted to see.”

“[Jesus] entered Jericho and was passing through” (v. 1), and so, “[Zacchaeus] was seeking to see who Jesus was.” Why the curiosity? Maybe that was his personality. Or perhaps Zacchaeus had heard stories about other tax collectors (like Levi, 5:27-28; cf. 15:1) that intrigued him. I wonder if he was experiencing conviction of sin and wrestling with guilty feelings, and so wondered if Jesus might have something to say that would relieve him. “So he ran on ahead and climbed up into a sycamore tree to see him, for he was about to pass that way” (v. 4).

“And as the Savior passed that way, he looked up in the tree. And he said, ‘Zacchaeus, you come down!’”

Perhaps at first, Jesus simply stopped. Zacchaeus might have been thinking, “I couldn’t have picked a better spot! I wonder if he’s going to speak. Maybe this is ground zero for his next miracle!” But then, Jesus “looked up” (v. 5). “Oh no, now everybody is staring at me!” And then Jesus spoke his name: “Zacchaeus, hurry and come down . . .” I remember singing this part of the song as a boy with a tone making Jesus sound almost frustrated with Zacchaeus, like a parent irritated with a child who refuses to get out of bed to come to the table for breakfast. But that does not really fit the scene; Christ’s call was loving and full of hope!

Jesus even says he “must” stay at Zacchaeus’ house (v. 5). Why was he so intent on doing this? Verse 10 is the answer: “For the Son of man came to seek and to save the lost.” This was the day of Zacchaeus’ deliverance, so Jesus would do what it took to save him — not just go to his house, but ultimately to the cross to die in his place. “So [Zacchaeus] hurried and came down and received him joyfully” (v. 6).

What transpired next? A great transformation. Rising above everyone once again (this time not up a tree, but “he stood”), Zacchaeus declared, “Behold, Lord, the half of my goods I give to the poor. And if I have defrauded anyone of anything, I restore it fourfold” (v. 8). He gave to the poor well beyond the required 20% (cf. Lev 6:5; Num 5:7), and determined to pay back four times the amount of what he had extorted from people.

Here was Jesus conclusion: “Today salvation has come to this house, since he also is a son of Abraham” (v. 9). Zacchaeus now shared the faith of Abraham (cf. Rom 4:1-8), evidenced by his transformed life. There were others watching this unfold, and because of Jesus’ positive interaction with Zacchaeus, “they all grumbled, ‘He has gone in to be the guest of a man who is a sinner’” (v. 7). We learn not only about their hearts, but the heart of Jesus: he truly “came to seek and to save the lost” (v. 10), those who know that they are sick and need a physician (5:31-32).

The story of the salvation of this wee little man highlights some encouraging truths about the ministry of Jesus toward lost people today.

First, Jesus is still seeking the lost in order to save them. Is the Lord seeking you? Here is one evidence that he is: if you can read English, you have access to a Bible in your language that you can immediately pick up (or click on) and read not just ten verses in Luke 19, but all of Luke, which is all about the Savior who came to seek and to save the lost!

Second, Jesus sometimes saves even the worst sinners. Jesus loves to save even the most ungodly who repent and look to him. I am not saying that only notorious sinners need to be saved — we all are enemies of God in need of a Savior! I am just saying that even the worst can be and sometimes have been saved, and that should cause us to say, “If God can save Moses, and David, and the woman at the well, and Zacchaeus, and Paul, he can certainly save anyone, even me!” And then I hope you will immediately join Abraham, and Zacchaeus, and believe in the Lord Jesus.

Third, When Jesus saves the lost, he transforms their lives. J.C. Ryle observes, “Freely pardoned, and raised from death to life, Zacchaeus felt that he could not begin too soon to show whose he was and whom he served. . . . Let us take heed that our souls are saved. Once saved and converted, we shall say, ‘What shall I render to the Lord for all His benefits to me?’ (Ps 116:12)” [Expository Thoughts on Luke, located at www.monergism.com].