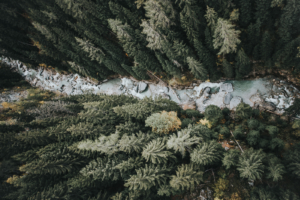 If you’re a political conservative in America, topics like environmentalism and animal treatment may make you bristle. To me at least, these were always “liberal” issues. They didn’t fit into the current conservative platform in our two-party system and so I assumed that I should not care about them. But I see now that I was not understanding the big picture. Even though many environmental activists may be motivated by non-Christian presuppositions, I am convinced that care for God’s creation is far more than a liberal or conservative talking point; it is a Christian responsibility.

When God made the world, he made it very good. He made it beautiful, he made it intricate, and he made it wonderfully purposeful. His creation is at the same time like a work of art that pleases the senses and like a house that is perfectly designed to be used and lived in. In fact, when we read Genesis 1, we are especially struck by that last idea. The lights in the heavens, the dry land, and the vegetation were all ordered for the purpose of sustaining animal and human life. It was indeed our “house” to move into.

And this would be enough to convince us to steward the house well. But God made his intentions for humans even more explicit. Genesis says that he made humankind in his “image” and “likeness” so that they might “rule over the fish of the sea and over the birds of the sky and over the cattle and over all the earth, and over every creeping thing that creeps on the earth” (Genesis 1:26).

The language here is royal language. Just as ancient kings were sometimes considered the “image” of the gods as they ruled over their subjects, so humankind is made in the true God’s image in order to rule over his created animals and over “all the earth.” All humans are thus made kings on God’s behalf, and like any truly good king they are to seek the flourishing of their kingdom.

Old Testament Hints of God’s Concern for His World

Throughout the rest of the biblical story, we get hints of God’s concern for his world. For example, every seventh year, the Israelites were to let their land lie fallow. God intended for the land to have time to replenish itself so that it could continue to be productive, that the benefits of the land would be available to the poor, and that both the domesticated and wild animals would have food.

But during the seventh year the land shall have a sabbath rest . . . you shall not sow your field nor prune your vineyard. . . Rather the sabbath growth of the land shall be your food: belonging to you, your male servant, your female servant, your hired man, your temporary resident, and the immigrants among you. Even your beast and the wild animal that is in your land shall have all its crops to eat. (Leviticus 25:4-7)

The Torah also taught, “You shall not muzzle an ox while it is treading out the grain” (Deuteronomy 25:4), meaning that animals used for work had the right to be treated respectfully and to reap some of the benefits of their labor.

In the Psalms, we find a very high view of God’s creation, both its wonder and its usefulness. In several places, we learn that God created the resources of the world at least partly in order to provide for animals. For example, Psalm 104:10 says, “He is the one who sends forth the springs into the wadis; between the mountains they flow; giving drink to each of his wild creatures.”[1]

The Resurrection and the Value of the Creation

The biblical story continues to affirm the value of God’s creation even in the New Testament. The resurrection of Jesus is one event in which we see clearly that God cares about this world. You see, many of us tend to view the material world as somehow inferior to the incorporeal, or “spiritual,” but God didn’t bring Jesus back to life as a disembodied spirit. Nor did he give him a brand new body. Instead, he transformed Jesus’ own body into something better. God considered it valuable enough to preserve it and redeem it. The Bible even teaches that the same sort of resurrection will happen to our bodies and eventually to this creation that we live in. God isn’t going to trash it and replace it; he’s going to renew it. If this is true, we shouldn’t trash it either.

We must be willing to admit that God’s world and his creatures are often overused, abused, and discarded because of human greed. God has given us this world to use, but also to steward. As we consider issues such as pollution, deforestation, and factory animal farming, we must ask ourselves: are we treating God’s creation, including animals, with the concern and respect he desires? I hope that each of us will do our part, at least in a small way, to be better rulers the wonderful world that God has made.

[1] I am indebted to Sandra Richter’s excellent work for the examples in this section. See “A Biblical Theology of Creation Care,” The Asbury Journal 62/1:67-76.