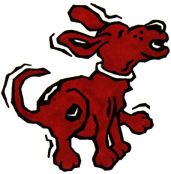 Most boys of my generation did it. It was frowned upon then too, even if not as much as today. But, I confess, we did it. These days, dogs are confined to the yard. But when we were young the dogs ran the neighborhoods of suburban Peoria, IL. We knew every neighbor’s dog by name, and we knew which ones to pet and which ones to avoid. Every now and then the neighborhood’s “mean” dogs would run together in packs. And sometimes a pack of dogs would seem threatening, at least to a young boy. And that’s when we were likely to throw the rock. We were bound to hit one of them.

We were never entirely certain when we threw the rock which dog we would hit, but we had no trouble afterwards knowing which dog we had hit. It was very obvious. There might be two dogs or there might be eight, but it was very clear which dog felt the rock—it was the dog that yelped.

I’ve noticed the same in preaching. It’s a preacher’s unpleasant duty to preach against sin—the sins, that is, that are likely to be committed by the people to whom he is preaching. He just has to do it if he is to be faithful to the Lord and to the church. And in preaching against those kinds of sins, it has never been difficult to tell who gets hit. Inevitably, it seems, the one that gets hit yelps. He or she suddenly complains that the preaching is “too personal” or that it “pushes us too hard.” They are uncomfortable with the “meddling.” This, I can only assume, means that the preaching has hit the mark. Someone got hit and yelped. The grumblers don’t realize, of course, that their complaint amounts to a confession, but there it is. It doesn’t take a prophet to see it.

Here’s a good test for us, a simple means by which we can test the sincerity of our heart before God and in relation to our sin. We have all been in the hot seat when a faithful preacher exposes our sins. We have all squirmed inwardly as the Spirit of God takes His preached Word and puts His finger on something in our life. It is at that point that we are about to show ourselves. We can say, like David when Nathan exposed his sin, “O Lord, I have sinned! Forgive me!” Or, like Saul when Samuel exposed his sin, we can just yelp.

Our response to the exposure of our sins from God’s Word speaks volumes about us.