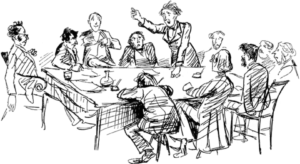 I have dealt with dissenters in the church for a good portion of my ministry, particularly during the first 30 years. Gratefully, since founding The Summit Church 21 years ago, I have not dealt with any of this in our church (so I now know it’s possible!) But, I have counseled many, many pastors who live with such contention in their churches.

If you are not careful, the whole ministry of a church can be hijacked by the sideways energy that contentious people create in the church. It is Satan’s greatest ploy and delight to create such diversions, for the church carries the hope of the world.

THE NATURE OF DISSENSION

Notice how “religious” men attacked the early church in Acts 6:9-15.

1.They rose up and argued

vs. 9 “they rose up and argued with Stephen”

(Remember that there were not many more godly men in the NT than Stephen, a man “full of the Spirit and wisdom,” “full of grace and power.” His opponents were “unable to cope with the wisdom and the Spirit” with which he was speaking.)

2. They moved in secret

vs. 11 “then they secretly induced men to say…”

3. They stirred up others

4. They were unafraid to use deception

vs. 13 “they put forward false witnesses who said …”

vs. 13 “This man incessantly speaks against this holy place and the Law”

6. They did their wickedness in the guise of spirituality

vs. 13 “This man speaks against this holy place and the Law”

7. They hated the loss of their kingdoms and the status quo

vs. 14- “we have heard him say that this Nazarene, Jesus will destroy this place and alter the customs.

Satan doesn’t have to be creative to create conflict in most spiritual communities. He just sows a few tares among the wheat. They are fine and undisturbed with nominal Christianity. But when a leader challenges them to walk sacrificially with the Lord and move at the Holy Spirit’s initiation and the directives of Scripture, contentious people can become destructive and deadly. The usual reason is that they have not bent the knee to the Lordship of Christ.

OUR RESPONSE TO DISSENSION

Sometimes the conflict is caused by an unprincipled leader. This is why the standard for leadership is high, described by 22 character qualities in 1 Timothy 3 and Titus 1. A pastor “must be” this kind of man if he is to lead well.

Thankfully, Stephen gives us a model for how we are to react. He responded with the twin values of truth and grace, so often tied together in Scripture.

We hear his great words of truth—even very confrontive truth—in Acts, Chapter 7. At one point he said, “You men who are stiff-necked and uncircumcised in heart and ears are always resisting the Holy Spirit; you are doing just as your fathers did” (Acts 7:51). But in all of his words, he simply stuck to the Bible and reminded them of what God had said. He did not deviate from the truth to try to prove his point or manipulate the situation.

But we also see him responding with astounding grace. In the midst of this bitter attack, when they looked at him, “all who were sitting in the Council saw his face like the face of an angel.” You can’t fake such a picture. Stephen was maintaining a humble walk with Christ. When they finally tried to destroy him, (which is not beyond a contentious crowd), he forgave them while they were stoning him, pleading with God to “not hold this sin against them” just like his Master had done.

God rewarded Stephen’s faithfulness by opening heaven during the conflict, sustaining him by a vision of the glory of the Lord. And then upon his death, God received him into heaven—the church’s first martyr.

May God give us leaders full of grace and truth to shepherd our churches. And may He fill our churches with gracious, uncontentious people to serve the body of Christ. Such humble holiness will show a watching world the beauty of Christ.