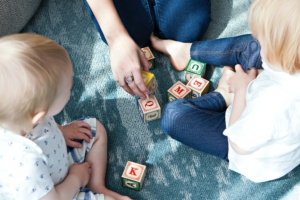 If you have ever been to the hospital to see a newborn baby, your first words to the mom were probably not, “What a beautiful little sinner you’ve given birth to!” However, those words are completely accurate. Not only is the baby a “beautiful” creation of God (cf. Psalm 139:13), but it is also a “little sinner.” Children are born sinners. This is why we absolutely must teach the gospel of Jesus Christ to children.

Even those outside of the church are beginning to admit that children are sinners. Dr. Vasudevi Reddy, of the University of Portsmouth’s psychology department, studied more than 50 children and conducted interviews with their parents. Even though behavioral experts used to think that a brain was not developed enough to formulate lies until four years old, she discovered that babies actually start lying as early as six months. By the age of two, they are nearly experts at deceiving their parents in order to avoid punishment.

The practical evidence that children are born sinners corresponds with what the Bible teaches about the depravity of man. The letter to the Romans begins with the truth about humanity’s utter depravity: First, Paul teaches in Romans 1:18-32 that all Gentiles are unrighteous. Then he describes the unrighteousness of Jews in Romans 2:1-3:8. Finally, he lumps all of humanity together in Romans 3:9-20, declaring that “all are under sin.” He says, “There is none righteous, not even one.”

A police study on juvenile delinquency got it right when it revealed these findings:

Every baby starts life as a little savage. He is completely selfish and self-centered: he wants what he wants—his bottle, his mother’s attention, his playmate’s toys, his uncle’s watch, or whatever. Deny him these and he seethes with rage and aggressiveness which would be murderous were he not so helpless. He is dirty; he has no morals, no knowledge and no developed skills. This means that all children, not just certain children, but all children are born delinquent. If permitted to continue in their self-centered world of infancy, given free reign to their impulsive actions to satisfy each want, every child would grow up a criminal, a killer, a thief, and a rapist.1

The Bible not only declares that we are sinners, but it says that we are sinners from the start; we come into the world not in Christ but in Adam (cf. Romans 5:12-19). We can all echo David when he said in Psalm 51:5, “Behold, I was brought forth in iniquity, and in sin my mother conceived me.” David was not talking about his mother’s sinfulness, but his own utterly depraved nature. This is a reality for every child. Everyone is born with a radically depraved heart, spiritually dead in his or her sins (cf. Ephesians 2:1).

In Mark 7:21-22, Jesus said, “For from within, out of the heart of men, proceed the evil thoughts, fornications, thefts, murders, adulteries, deeds of coveting and wickedness, as well as deceit, sensuality, envy, slander, pride and foolishness.” The external acts and internal attitudes Jesus lists routinely manifest themselves in our lives, and it is only because of the restraining grace of God that some of these sins have not yet thrived. Like an angry group of bees rising from a hole in the ground upon an unsuspecting person, this list of sinful attitudes and acts describes the ugly swarm of evil that may arise from within the soul of any man and woman, boy and girl.

“Not my baby!” a mom may object. Sadly, it is so. And though the impact of a child’s sin upon others is usually not as severe as when an adult sins against another, we must remember that the reason sin is so horrendous is because it is rebellion against God (cf. Psalm 51:4). If a boy kicks a girl in the shin because she won’t play on the slide with him at the park, that is a sin against that innocent girl, but it is ultimately against God. Consider how serious it is to sin against God Who is far above all creatures (cf. Acts 17:25). How can we even begin to measure such tragic rebellion?

The depth and severity of our sin is especially revealed in the cross of Christ. If sin were a minor matter, would God have sent Jesus to die for sinners? If it is easily atoned for, like a speeding ticket, then it is illogical that the payment had to be the life of the sinless Son of God. But God did send His Son to die for sinners, and this only magnifies the horridness of sin. We dare not ignore this personally, nor in the lives of our children. We must recognize that if they reject the work of Christ and die in their sins, they will get hell for eternity (cf. John 3:36).

The issue of a child’s sinfulness is worthy of so much more than a flippant, “Oh well, kids will be kids. Nobody’s perfect!” Our children are among those without an inherent righteousness—they desperately need the righteousness of Christ and the forgiveness of sins that He alone provides, or they will perish! Though our children’s sinfulness may nearly drive us insane at times, it should rather motivate us to convey the gospel to them.