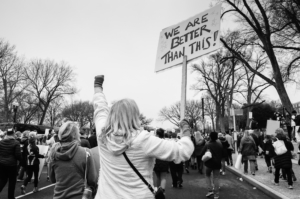 Most people think there’s something wrong with the world. Ask almost any of our nation’s recent immigrants and they’ll tell you that without hesitation. That’s because when they came here to find something better they were fleeing something worse, usually violence or poverty.

But it’s not just immigrants who think so. Ask any born-and-raised American and they’ll tell you what’s wrong—economy, race relations, education. At least, I imagine that this is what they will tell you since all of our political candidates campaign with the clarion call of “change.”

I would say that this dissatisfaction with the world is increasing, but I can’t really be sure. One would assume that there was just as solid a recognition of the world’s problems among the generations who lived through WWII, the civil rights battles, and Vietnam. But perhaps there is an increase of dissatisfaction among my particular generation of millennials. We must be getting older.

While almost all of us may agree that there is something horribly wrong with the world, we may disagree very much on what it is and how to fix it.

While walking through my urban neighborhood a few weeks ago I met a woman who asked me for bus money. She was in bad shape, with pants 8 sizes too big and a vague and disjointed story. She claimed to have been attacked the night before by the railroad tracks and was looking for a way to get home. Most noticeably she hadn’t showered in weeks. As I walked her to my house so that she could shower and my wife could drive her home, I asked her what she considered to be the biggest need in her life. She replied, “I need to get back home to Tennessee because this kind of thing just doesn’t happen there.”

But she’s wrong. Changing geography would not ultimately fix her problems. I can almost guarantee you that “this kind of thing” does in fact happen in Tennessee, and everywhere else in the world. If we are ever going to find solutions we are going to have to look deeper for problems.

Clearly, many have been more perceptive than my neighborhood acquaintance and offered more sophisticated answers. Some have pointed the accusing finger at ignorance and prayed to the gods of better education. And while we must commend them for their efforts to improve our world, we must concede that the most educated people in the world are often the most evil. Others have prayed to more recognizable gods, running to the practice of religion. But from my perspective, church-going, ritual prayers, and incense-burning seem to affect very little change in the millions who take part. Still more have sought solutions in changing the systems and institutions of our society. “If we could achieve fairer laws, we could achieve a better world,” they say. But can better systems really make the world better? Most laws don’t make people nice to each other. They just punish people when they aren’t.

As I see it, Jesus’ diagnosis is really the most perceptive. Humanity’s problem, he claimed, is a problem of the heart. He said:

This is a revolutionary idea. He wanted to see past the surface behavior to the bitter root. Instead of seeing murder as the main issue, for instance, he pointed instead to inward anger. Rather than focusing on sexual promiscuity, he drew attention inward desires that exploit women. He wasn’t fooled by any surface show of goodness either. The Pharisees had to feel his fierce perceptiveness often. “You clean the outside of the cup and of the dish,” he said, “but inside they are full of robbery and self-indulgence!” (Matt 23:25). In the end, he claimed that those who are truly blessed are those that are “pure in heart” (Matt 5:8).

If Jesus is right, the human problem is deeper than most have acknowledged. We can sometimes modify behavior with education, put on a show of goodness with religiosity, and deter evil with improved institutions, but we will be missing the point until we make the humbling confession that the real problem is way down deep inside of each one of us. In my experience, that is an admission that most people are too proud to make.

The solution? According to the Scriptures, this problem is so deep that it can only be remedied by divine intervention. The Hebrew prophets spoke of a time when God would enter into a new relationship with humankind—a relationship in which God would empower us to goodness by changing our very hearts. And it was exactly this new thing that Jesus claimed to be bringing to the world by shedding his blood.

I’m an advocate of working for world change in practical ways. But let’s not forget that the best change happens inwardly and supernaturally, as we call the world and ourselves to contrite repentance and fresh faith in Jesus.