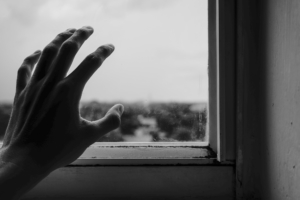 One man always comes to my mind when I think about people I’ve seen fall away from the Lord. He was so zealous for Jesus when I baptized him. His fervor lasted for several years. But then he started to “run with the wrong crowd.” He became enslaved to alcohol. As a school teacher, he would even show up for class “buzzed” from the night before. I crossed paths with this man a few years ago and pled with him to repent. I still don’t think he has.

In his final letter to Timothy, writing from the Mammertine prison in Rome, Paul wrote, “Do your best to come to me soon. For Demas, in love with this present world, has deserted me and gone to Thessalonica” (2 Timothy 4:10). Like the man I know, Demas had fallen away. He now loved “this present world,” perhaps better translated “present age”—the current time before the day when Christ returns (4:8). The “present age” is marked by ungodliness, worldly passions, and greedy pursuits (cf. 1 Timothy 6:17; Titus 2:12).

At some point Demas’ love for the return of Christ grew cold. He lost sight of the future kingdom of God and chose to go back to his own little kingdom in his hometown of Thessalonica where he would experience a life of ease—a massive contrast with the suffering he faced in Rome.

Demas’ story has repeated itself throughout church history. But this isn’t just about falling into gross sin. Even the person who consistently chooses family or sports over church life is demonstrating a Demas-like love for the things of this world.

Consider three tragic consequences that resulted. They are a warning to us all:

For several years before Paul wrote Second Timothy, Demas was one of Paul’s trusted ministry workers (see Colossians 4:14; Philemon 23-24). But once Demas left for Thessalonica, his God-honoring ministry ceased. Sure, he could have continued to minister in the church in Thessalonica, but not with the blessing of the Lord.

Paul urges Timothy to come to him in Rome because Demas “deserted” him. He uses the same word when he says in 2 Timothy 4:16, “At my first defense no one came to stand by me, but all deserted me.” The word means “to forsake.” Jesus uses this word when he says on the cross, “My God, my God, why have you forsaken Me?” (Mark 15:34). It’s a forceful action.

Demas’ behavior was very unkind. Paul was suffering and needed others around him to support him, yet Demas skipped town. Not only would there have been additional physical suffering because of the loss of care, but this certainly hurt Paul emotionally. Demas should have stayed. A brother was in desperate need of love. Instead, he chose self.

Third, the Lord was forsaken

In his desertion of Paul, he was also forsaking the Lord. John put it like this: “By this we know love, that he laid down his life for us, and we ought to lay down our lives for the brothers. But if anyone has the world’s good and sees his brother in need, yet closes his heart against him, how does God’s love abide in him?” (1 John 3:16-17). I don’t know what became of Demas. I hope he repented. But if he did not return to the Lord, we can deduce that he never was a believer in the first place.

Look at all that would happen if you fell back in love with this present age. You would lose ministry that honors the Lord. You would hurt many people. And worst of all, you would forsake the Lord who has been so good to you.

Don’t even flirt with this present age. It’s not worth it! You might regret it for eternity. Let the story of Demas, and the tragic consequences of his fall, encourage you to persevere even when suffering comes because of your loyalty to Jesus. May it motivate you to believe his promises about the future and to keep longing for his return and for the “crown of righteousness” he’ll give “to all who have loved his appearing” (2 Timothy 4:8).

But you won’t finish the race in your own strength. You need the Lord. Here are words from a hymn by John Earnest Bode (“O Jesus I have Promised”) that you might use as a prayer for Christ’s help.

O Jesus, I have promised to serve Thee to the end;
Be thou forever near me, my Master and my Friend;
I shall not fear the battle if Thou art by my side,
Nor wander from the pathway if Thou wilt be my Guide.

O let me feel Thee near me! The world is ever near;
I see the sights that dazzle, the tempting sounds I hear;
My foes are ever near me, around me and within;
But Jesus, draw Thou nearer, and shield my soul from sin.